The Norco branch of the St. Charles Parish Library is on the move, though it’s not going too far.

The library was initially set to close its current location on Good Hope Street on Wednesday to begin its move to a new, larger location at 590 Apple St., though the library announced Tuesday that the Good Hope site would remain open for a bit longer while a few details are finalized. Library spokeswoman Lauren Pitz said  that despite that delay, the move will hopefully be completed within two-to-three weeks, with the week of May 20 the targeted opening timeframe.

While a bit of downtime comes with it, it figures to be worth the wait for avid readers. The new Norco branch will be more than double in size of the Good Hope Street location, a jump from 2,100 square feet to 4,530 square feet.

The library will utilize that space to include two group study rooms, additional computers, a family restroom, a larger meeting room, expanded seating areas and — of course — more browsing space to find that perfect book.

Outside the library doors, there will be a larger parking lot and an upgraded outdoor area to hold events, Pitz said.

“Also, being on Apple Street next to the post office and closer to more businesses and neighborhoods, will make us more visible and a bigger part of the Norco community,” she added.

Pitz noted that plans to move into a new building have been in the works for some time.

“We are proud to be a part of Norco’s revitalization.” – Lauren Pitz

“We’ve known for a while that the Norco Branch needed more space, but it was a matter of finding the right location and it being the right time. The current Norco branch is our smallest location, and it often becomes crowded during popular events,” she said.

That right location proved to be on Apple Street. The parish’s library system purchased the site in 2015, with the hope of increasing programming, adding convenience and ultimately growing visits.

Pitz said the increased space in the meeting room and throughout the indoor and outdoor areas as a whole should allow for more activities to be planned at the branch. The library system has hosted several popular events at its different branches to stir interest in recent years and attendance has been strong.

“We know that the residents of Norco have patiently waited for a new library and watched as the construction took place,” Pitz said. “We’d like to thank everyone for their patience and support, and we cannot wait to see everyone when the new Norco branch opens. We are proud to be a part of Norco’s revitalization. It’s going to be great.” 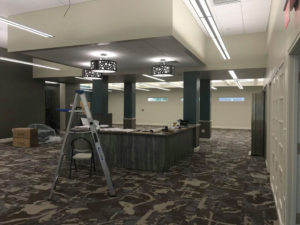 A whole new world of books

Louise Diest remembers her husband as a giver, a teacher, and a man who despite something of a gruff exterior, loved to help others become the best they can be. […]