Describing themselves as being on the “forefront of a financial revolution,” Coin Bayou has opened a new “cryptocurrency” location on Airline Highway in Norco.

“I know it doesn’t look like much right now, but that small property in small town Louisiana houses one of the largest Bitcoin operations in the South,” said David Chase, a partner in Coin Bayou.

“I’m doing something kind of new,” he said. “And it’s working so far.”

The appeal of the location was lower costing electricity, which is intensely used by computers that process Bitcoin transactions. Chase said Louisiana is rated third in the nation for cheapest electric power. 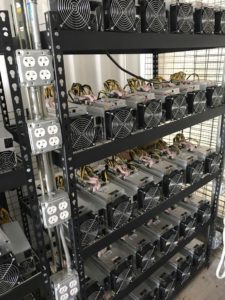 “I needed a lot of power in a very small amount of space,” Chase said.

Entergy assured him he could get 1 megawatt of power at any time, which he said would be needed to accommodate his plans to expand operations but keep them centralized.

By late this year, he plans on having four shipping containers of computers, which he uses to house them. By 2019, he hopes to double that number.

“It’s a simple operation with computer access to the Internet,” Chase said.

Chase, along with his partner Clay Kirkpatrick of Lake Charles, have started the operation with 120 miners (computers) handling transactions with “cryptocurrency” or digital dollars.

Bitcoin is an alternative type of payment system that has emerged in the news for good and bad, including security issues with millions in value lost to hackers. It is a way to conduct business outside the control of the government and the “fiat” or government managed currency like the U.S. dollar.

Chase said it is a growth industry with $21 million in Bitcoin value that will be in circulation by year 2100.

“The cool thing about what we’re doing in St. Charles Parish is we’re more than likely among the largest Bitcoin miners in Louisiana,” he said. “We are more than likely one of the top 10 largest in the South, and we’re in downtown Norco to grow a business even further than we have now.”

More flood protection for St. Charles Parish could be on the way, as the U.S. Army Corps of Engineers has re-designed and re-released the Upper Barataria Louisiana Feasibility Study. […]

Drainage improvements continue throughout the parish

The completion of two additional 72-inch culverts, which will significantly increase drainage capacity, should be completed in Destrehan this month. […]