At a table in Boot’s Diner in Luling, Victoria Young is clearly eager to find ways to improve service and business with her children.

It’s part of the Ama mother’s plan, a move she and her husband made in late March to grow a business and provide a future to her children.

“We took it over and kind of freshened up the place to be able to open,” Young said. “Once we got the permits and opened, we were doing really well.”

At the time, it was an easy direction for them.

When the restaurant was called Maggie Mae’s Diner, Young was friends with the owner and was cooking crawfish etouffee’ on Fridays. Her daughter, also named Victoria, was working there, too. Then came the opportunity to own the business and they took it.

But, early on for Young, the situation changed drastically.

Only two or three weeks into running the business, Young developed a pain in her side and related health issues that wouldn’t go away. About the same time, her daughter announced she thought she was pregnant. They see the same doctor, so they scheduled an appointment together in July.

Just days later, Young’s pain worsened to the point she couldn’t stand it anymore and rushed to the emergency room. 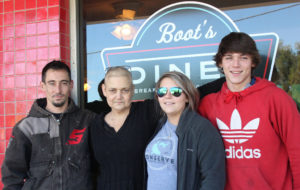 A CAT Scan was done and the results left her stunned.

“The doctor came with papers in hand and sat down,” she said. “He told me there was no other way to say it. I had stage 4 bladder cancer.”

She was in disbelief.

“The crazy thing was I had been to the doctor in October and it never showed anything,” Young said. “We’re all still dumbfounded.”

A tumor was removed, followed by a visit to MD Anderson in Metairie. She got more disheartening news when the doctor told her there was still more of the tumor remaining that required another surgery. It was done and then she began chemotherapy.

Soon after, she returned to the ER to check a tube draining her kidneys, which revealed a dark spot on her liver.

Despite chemo, the cancer had spread.

Young went from chemo to a cancer treatment called “Kymera,” which she is taking at this time aimed at eliminating the tumor. She’s been told she’s going to lose her bladder and some surrounding tissue and live with a colostomy bag.

“It’s been a disaster,” she said. “I can barely eat and eating hurts my stomach. I’ve lost close to 50 pounds since this all started.”

Her medications have also altered her taste buds.

Her food choices are limited to Chef Boyardee, yogurt and Cheerios (although they taste burned to her).

But it’s very different than what she’s accustomed to as her father managed Mrs. Drake Sandwich Co. in New Orleans.

“We delivered in downtown New Orleans,” she said. “He had 14 routes in Louisiana.”

“I hope we outgrow where we are and move into a bigger place one day, a place they can raise their families off of. That’s my dream anyway.” – Victoria Young

Young grew up in this atmosphere, helping people with their catering orders and delivering them to customers. Her Lebanese roots also had her brothers and sisters working on recipes like Kibbie made of bulgur, minced onions and finely ground beef and pork with Middle Eastern spices (cinnamon, nutmeg, clove and allspice), as well as grape leaves with a rice stuffing topped with tomato sauce.

These tantalizing thoughts all came to mind when she got the restaurant.

What’s happening with her health is depressing, she said. But Young said she can’t afford to give in to sorrow.

“You can’t get depressed because that makes it worse,” she said. “You have to stay upbeat … no stress … no fussing.”

Young said she’s got every reason to fight the disease.

And she has more in mind for this business.

“We had a blast working with Cassie and that just brought back the memories of working with my dad and family,” Young said. “I could bring my kids in it and keep the restaurant going for them. They’d never have to worry about a job. I wanted it for them. That’s the plan.

“I hope we outgrow where we are and move into a bigger place one day, a place they can raise their families off of. That’s my dream anyway.”

When Roy Lunk wrote his first book on the history of his home community of Des Allemands, he had modest ambitions – perhaps a few hundred people would take interest, he thought, and at the very least his children would have a reference point to learn about the rich history of their home. […]

Judy Marie Boudreaux Guhman passed away on July 31, 2020 after a long battle with carcinoid cancer at the age of 78. She is survived by her beloved husband of 53 years, George H. Guhman; […]