The weather was cooperative for the 37th annual Martin Luther King Day March in St. Charles Parish on Monday, as a large group of participants came together to celebrate and honor the great activist’s incredible legacy.

The march is coordinated by the Martin Luther King Jr. Commemorative Organization and saw participants begin at the Westbank Bridge Park in Luling, march down River Road and arrive at Eual J. Landry Middle School, where a commemorative ceremony closed the proceedings.

Hahnville High alum, author and attorney Rochelle Guiton was a featured speaker at the event. Guiton published her first book, Fierce and Fearless, in April of 2022, offering advice and inspiration for young women based on her life experiences.

Ella Grace Francis also performed at the event. Francis, 13 and of Destrehan, is a rising singer and songwriter who recently released her first single, Here I Am, and performed at the New Orleans Saints’ final game last week.

Everyone was gathered to remember King, a man synonymous to this day with the advancement of civil rights.

“All of the things he said still ring out and are relevant today … for us to understand the importance of being vocal about our civil rights and our liberation,” Guiton said. “Even though we’ve accomplished so much, we still have milestones to reach. I love that the parish has kept this tradition of over 30 years, so that those who come after will understand the value and importance of what Dr. King was doing back in those days and what they were marching for.”

Guiton, who now lives in Texas, said she was more than honored to get the invite to speak at Monday’s event and that she was proud to march alongside everyone.

“I was honestly speechless,” she said. “I was so honored to speak on my experiences and to speak about Dr. King. It was huge for me to speak on that before people who have been so important to me for my entire life.”

Dwayne LaGrange of the MLK Commemorative Organization said that this march is part of ensuring King’s hard work and sacrifices in the name of progress are never forgotten, and that his inspiration lives on for generations to come.

“We had a pretty decent amount of young people participating this year, and we like to see them take part and learn more about what Dr. King learned for,” said LaGrange. “We know Dr. King put some serious miles on those shoes he had. We want them to understand that if he can do that in rain, sleet, in that kind of climate, it shouldn’t be difficult for us to do that on a nice day like we had (Monday). It’s all to continue to keep his dream alive.”

LaGrange called back to a famous quote of King’s to describe what the march represents.

“We’ve learned to fly the air like birds and swim the seas like fish … we have to be able to learn to walk the earth as brothers and sisters,” LaGrange said. “Every year, we feel like this march is always a step in the right direction.”

King was and remains an icon, known for advancing civil rights while advocating non-violence. He participated and led marches in a push for African-American voting rights, desegregation and labor rights, inspiring the marches in his honor today. The Nobel Peace Prize winner called for civil and economic rights and an end to racism in his legendary “I Have a Dream” speech on the steps of the Lincoln Memorial in the summer of 1963. He was assassinated in 1968, but his message has stood the test of time.

LaGrange has been participating in the event since the 1980s.

“My parents and grandparents, as well as people in my community always spoke of Dr. King, we always watched clips of him marching and making speeches, and it always resonated with me,” he said. “They made a point to make sure we understand our history, where we came from and how far we’ve come. We have to press on and make sure the younger generation understands that it wasn’t always pretty and wasn’t always easy … we had people at the forefront making sure our liberties were protected and that we can all make sure equality stood out.” 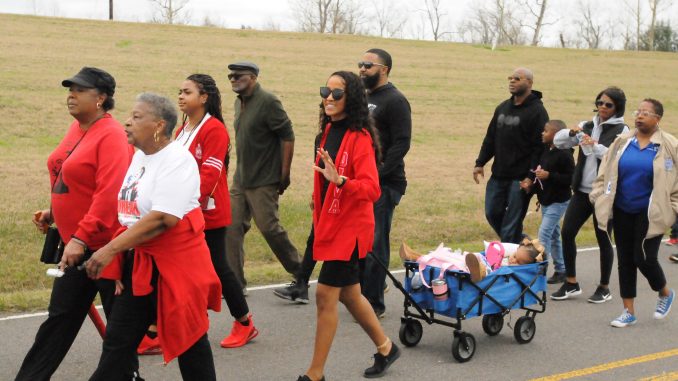