Coy and Jeri Landry had returned to their room on the Viking Sky when they heard about windows breaking in restaurants and the cruise ship taking water, then the boat lurched so violently they were thrown down and slid across the floor.

Jeri grabbed hold of a table.

“My mother said when the weather was bad we should do the rosary,” Jeri said. “And that’s what we were doing when the mayday call came through and that we had to return to the muster stations (emergency locations).”

Their 12-hour ordeal had begun around 2:30 p.m. Saturday, but the Luling couple didn’t know about the cruise ship’s dying or dead engines. The ship had also been hit by 26-foot high waves and 48 mph winds, and was drifting toward rocks.

Glass had blown out in the restaurant where they’d just eaten and it had two feet of water in it.

“People were hurt and they got all wet,” Coy said. “They lost their cell phones. We couldn’t go back to the rooms – not for anything. All of the crew guarded all of the different passages. The crew was wonderful … all of those young men and women, even the people who performed, were all in action.”

Coy said they were moved often, waited a while and then were moved again. They had been given life jackets.

“Some of the people were starting to panic,” he said. “We heard screams, but most people were calm and waiting for instructions from the captain.”

The captain did say the ship had been anchored in place, but Coy said he knew they were in some of the most dangerous waters in the North Sea.

As they moved, they gradually got upward by 2 a.m. until they reached the evacuation point, which was on top of the boat. From that height, they saw the dizzying, swirling large waves churning below, and were appreciative for their life jackets and medicines a crew member had retrieved from their room.

“Finally, it was our turn to get on the helicopter,” Coy said of a rescue that left him traumatized. “We had no idea what to expect, but we did not envision what actually happened. I envisioned a helipad and we’d walk in and sit on seats, but that didn’t happen. We were brought out two at a time and they put this harness around our shoulders, and hooked us together and then to this rope. 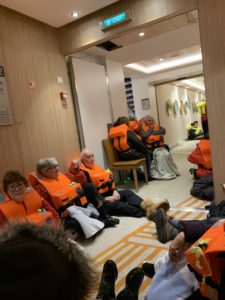 It was the Norwegian Coast Guard that hoisted them into the aircraft that Coy said had no seats. They were told to sit in the corner white the coast guard rescued 20 people at a time. They were among the first estimated 400 people rescued from the ship. With still another 1,000 passengers aboard, the ship was then “declared safe,” rescues stopped and it was towed to the port of Molde on Sunday.

They met Viking Ocean Cruises Chairman Torstein Hagen who assured them he would refund their trip, gave them $300 in krone (about $600 in U.S. dollars) and a shopping center was opened just for them to do some shopping.

Arrangements were made to get 900 passengers home early, which included Coy and Jeri who returned Monday night.

“We didn’t realize how important the news made all of this,” Jeri said. “It wasn’t until later we learned the rest.”

The couple thanked family and friends for the prayers.

Although they are veteran world travelers, this was the first time they’ve gone through such a harrowing experience. 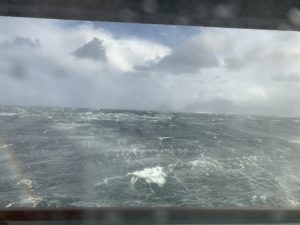 “One of the reasons that we were able to survive in a positive way is we believe in moderation and we have faith in God,” Jeri said. “We go to church on a regular basis and go to the fitness center. We sort of prepared when we travel. I was thinking on a much lighter note … thank God for Estee Lauder’s double wear makeup.”

A two-vehicle crash that occurred shortly after midnight this morning on LA Hwy 20 in Chackbay claimed the lives of three Hahnville High School class of 2021 graduates – Michaila Bowling of Luling, Hali Coss of Luling and Lily Dufrene of Luling. […]

The Friday night lights will actually be shining a day early this week for Hahnville, as the surging Tigers spring into action Thursday night to visit Terrebonne in the final week of the regular season. […]