The 42nd Krewe of Lul parade will roll with a record-setting 28 floats and two local celebrities, Vernon Higgins and his wife, Susette.

“Twenty eight is the highest number of floats that we’ve had in our history of parades,” said Parade Captain Beth Landry.

The Krewe of Lul will roll noon Saturday beginning at the Winnwood Shopping Center in Luling.

Last year’s parade, along with that of the Krewe of Des Allemands, was cancelled under threat of thunderstorms and generated an angry outcry.

“We did make a change this year,” Landry said. “The captains decided we are not going to cancel the day before. We are going to wait until the morning of the parade when bad weather is possible.”

Vernon Higgins said he is rolling regardless of the weather.

With this being a record year for the krewe, it’s a further honor to have Higgins, who founded the Krewe of Lul, as king.

Lul’s Grand Marshal Maurice “Mickey” Loupe Jr. also represents a line of parade royalty with his parents, as well as sister and brother-in-law, who all served as king and queen. 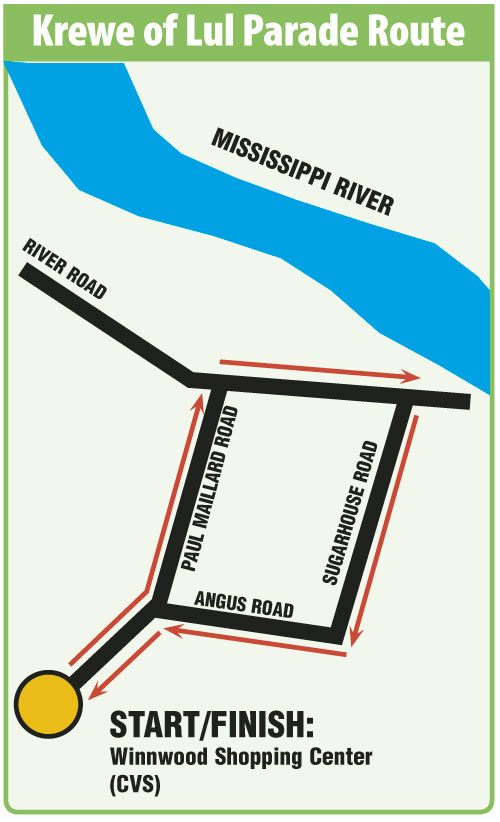 In addition to the floats, the parade will include 15 festival queens, 12 dance teams, three fire departments (Luling, Killona and Paradis), the Arc of St. Charles collecting beads, St. Charles Parish Hospital’s Mr. Peanut truck collecting jars of peanut butter for the Social Concerns food bank (parade goers are asked to bring jars of peanut butter to donate), as well as the parish’s Sheriff’s Office and EMS.

As intended last year, the king and queen will have their own float, rather than the designated float for royalty, Landry said.

“Due to Vernon’s history of building floats and riding in parades, they wanted to go nontraditional so they built their own float,” she said. “That’s something different that everyone will be excited to see.”

Vernon and Susette Higgins originally rode in the Krewe of Des Allemands parade and developed their own parade in Luling in 1978, which became known as the Krewe of Lul.

In the first year, they rode with six floats along with John and Jennie Buscalacchi as the krewe’s first king and queen.

“What’s unique with this parade versus a parade in New Orleans is you know most of the people riding. You’ll see people you know on every single float.”  – Beth Landry

To this day, some of the floats that line up for the Krewe of Lul also roll the next day in the Krewe of Des Allemands parade.

Beginning at Winnwood Shopping Center, the route will turn onto Paul Maillard Road, take a right onto River Road, a right onto Sugarhouse Road, another right onto Angus Road and circle back to the same shopping center.

“What’s unique with this parade versus a parade in New Orleans is you know most of the people riding,” Landry said. “You’ll see people you know on every single float.”

Per Krewe of Lul tradition, there is no parade theme. Each float will have its own theme and throws.

Parade spectators make a day of the family-friendly event, Landry said. They barbecue on the levee with family and friends.

Lady Tigers rally from early deficit to earn round one victory