Elise Montz was just a child when she recalled watching the prisoners working in the fields in St. Gabriel as she rolled by as a passenger on the Illinois Central Railroad.

Now at 92 years old, it’s one of the Norco resident’s many childhood memories of the time her father worked with the rail company.

They got on the train at the Good Hope Depot, which is gone but immortalized as a model at the library in Destrehan. Valero needed the location, but provided the model in remembrance when the building wasn’t in good enough condition to be relocated.

Montz was among the people who attended the ceremony dedicating the model and among the many people who knew firsthand the importance of the depot to the Good Hope community.

“We lived right next door,” she said. “My daddy worked for the railroad, as well as I worked in the depot during World War II [in 1943]. When it ended, people were coming back and taking the jobs the women had.”

Her father helped build the tracks that went into Shell Chemical and Shell Oil, she said. Because they had rail transportation, they didn’t need or get a car until later.

Nearly 30 years after being with Illinois Central, her father retired from the railroad but they enjoyed the perks of his job.

“If you worked for the rail, we did all our travel by train,” she said. “We’d get on in the morning and go to Baton Rouge and return the same day. There would be trains running day and night.”

After she married, Montz said they rode the train to go to the LSU games and come back home.

“We’d get on in the morning and go to Baton Rouge and return the same day. There would be trains running day and night.” – Elise Montz

“I’m a railroad person,” she said.

For Good Hope, the rail represented transportation and commerce. The depot had a ticket agent, waiting room and large office. In St. Charles Parish, there were also depots in Luling, Des Allemands, Destrehan and St. Rose.

The first railroads came to the parish in the 1830s, according to the book, “St. Charles Parish Louisiana: A Pictorial History.” Rail travel could be perilous with crude construction, poorly installed rails, locomotive boilers that sometimes exploded and animals that strolled onto tracks. Passengers were sometimes asked to help get the train going again.

Montz said her children would ask “Tell us about the olden days,” and she’d tell them about the railroad, as well as how they lived with coal burning stoves and oil lamps.

“Everything progressed after that and then we had electricity and indoor plumbing,” she said. “A lot goes on in 92 years.” 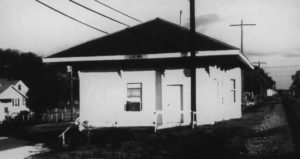 Paper teachers pop up all over St. Charles Parish

Faith Becnel’s American Idol journey may have ended Sunday night, but the Destrehan native insists it’s only the beginning of her musical career. […]