After Gabby Touchard’s nerves settled last Thursday, she did what she’d long prepared to do.

Touchard kicked off J.B. Martin Middle School’s first football game of the season in a literal sense, socking the opening kickoff downfield in her debut as the Cougars’ kicker. She showcassed a strong leg developed over several years on the soccer field since she took up the game at 4 years old.

She’s a two-sport athlete now – and she’s enjoying the moment.

“I was kind of nervous at first, but when I got on the field all of that went away,” Touchard said. “It felt good. I heard the crowd screaming and all of my teammates cheering.”

Touchard’s interest in placekicking began in 2019, when she and her family went to Atlanta to watch LSU defeat Oklahoma in the 2019 national college football semifinals.

“They had something called a fan showcase event,” Touchard recalled. “There was a line to kick field goals. My sister had kicked one, and after I saw her do it, that made me want to do it.”

For Christmas, she asked her parents for a football goal post set to practice on in the front yard. Wish granted, and she was able to work on her accuracy as a personal hobby – but no plans to try out for football.

That changed after the J.B. Martin football staff got to see her in action last school year.

“One day, my friend and I had the football out for P.E. I put it on the ground and got off a pretty good kick. All three of the football coaches were right there and they went to go get a game ball, so I kicked that,” Touchard said.

“I said, ‘Let’s see what you got,’” Faucheux said. “She thought it was a joke. I told her that she ought to try out next year, and she didn’t think I was serious. But I kept harping on her.”

Faucheux, also J.B. Martin’s athletic director, knew Touchard had athletic gifts from seeing her on the soccer field and also during his P.E. classes.

“She was nervous (about her debut) … she’s her own worst critic. She’s very hard on herself and she has a phenomenal work ethic. She went out and had three awesome kicks. She said, ‘I could have kicked better.’ It’s just how she is, but she’s doing a really great job. Not a great job for a girl – she’s a really solid kicker, no matter who. And she’s been awesome to have on the team.”

Touchard said the feeling she got from making the team is something she won’t soon forget. 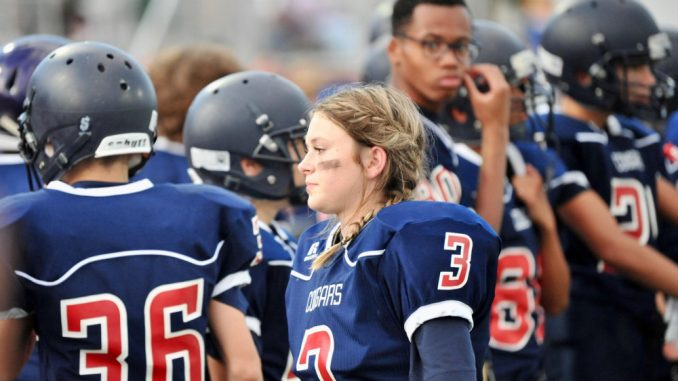 “Everyone was so supportive when I was trying out,” Touchard said. “When I looked at the list and saw my name on the roster, I got really excited.”

Her mother Rochelle said she couldn’t be prouder of her daughter.

“I’m most proud of the way she’s stepped up and owned it,” Rochelle said. “It’s great seeing her have the support of her teammates and of her friends. Kicker is a pretty lonely position to begin with, beyond also being the one girl on the team, so it’s a pretty courageous step for her.”

By all accounts, her teammates have fully embraced having her on the squad.

“She didn’t really know how the guys would take it, but they’ve really accepted her,” Faucheux said. “To the point where, she’s not ‘the girl on the team,’ she’s the kicker. She’s a girl in a predominantly boys sport, and you don’t see many, but I think she has a future if she sticks with it. She’s only going to get better and stronger from here. I’m hoping to see her go on to high school and keep going with this. I know she really enjoys it.”

Touchard takes her new role seriously. Faucheux said she’s inquisitive and a tireless worker. Rochelle noted Gabby works with her coaches and also with Alex Romero, former Hahnville High kicker who went on to kick at Nicholls State and with the NFL’s San Francisco 49ers.

She also gets a new way to bond with her brother, Gage – the two are now teammates with the Cougars.

“I never thought my husband and I would be able to say we have a boy and a girl on the football team, but here we are,” Rochelle said.

Touchard is proud to kick for the Cougars, and she hopes she isn’t the last female to be part of the team.

“I think it would be really cool if I’m able to inspire others to do what I’m doing,” she said.

CORRECTION: We have corrected the initial note that there have been no other female kickers in J.B. Martin history, as Aimee Melancon played the position for the Cougars in the 1990s. 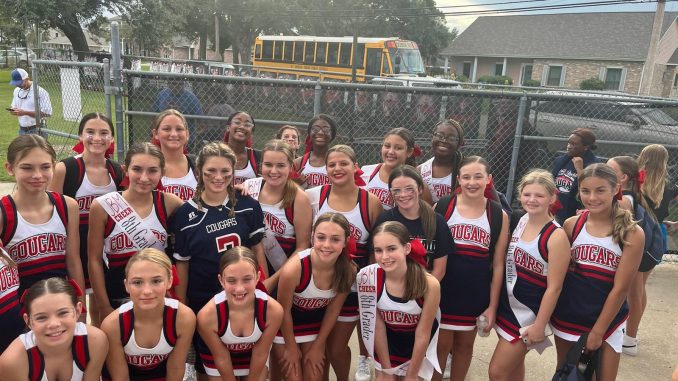 It was a standing-room only audience last month when St. Charles Parish Public Schools hosted the world premiere of Trailblazers, a documentary of the 1965 desegregation of the school system, at the Dr. Rodney R. Lafon Performing Arts Center in Luling. […]