Baby Luke’s parents knew their child would be born with a disease so rare it affects 3 in 10,000 pregnancies and has no survival rate, yet they refused an abortion.

“Alex and Chris still saw it was a life no matter how long,” said Luling resident Pete Murla, Alex’s brother who is helping raise awareness. “It’s still a precious life and they wanted to give it a chance … and hold out hope for a miracle.”

The miracle came, but not in the way they expected.

The baby survived just a few hours, but Murla said the family has been determined to raise awareness about anencephaly, which causes the absence of a major portion of the brain, skull and scalp that occurs during embryonic development. These children are typically born blind, deaf, unaware of surroundings and unable to feel pain. The disease has been connected to low folic acid, although medical professionals debate its cause and hereditary connection.

“Without those 17 hours, we wouldn’t have been able to raise awareness,” Murla said. “It’s really been a blessing that Luke is able to touch and raise awareness long after his short life.”

Luke’s parents, Alexandra Manguno and Chris Ditta of Harvey, knew their son had anencephaly from one of his early ultrasounds. Doctors encouraged them to abort the fetus, but the couple declined. Their son lived longer than most babies with the disease and many are stillborn, yet they still hoped for more time.

During their brief time with Luke, the couple felt his tiny hand squeeze their fingers.

“They made it a point to have skin-to-skin contact so he knew he was loved,” Murla said. “He actually passed in my sister’s arms.”

But in that time, they responded as a family to the tragic loss.

“It’s really been a blessing that Luke is able to touch and raise awareness long after his short life.” — Pete Murla

“That is part of the beauty of what Luke was,” he said. “He probably brought out strength in all of us that we didn’t know existed. The strength is not to take the easy way, not aborting the baby and knowing you’ll have to say goodbye to your child.”

At Luke’s service nearly two weeks ago, Murla also wrote a poem for him and read it at the funeral.

“Luke you are now an Angel so spread your wings and fly,” he wrote. “And on occasion come visit and dry an eye. Thank You Lord for giving us this beautiful gift albeit brief. Now please lay your healing hands on Alex and Chris and soothe their pain and grief.” 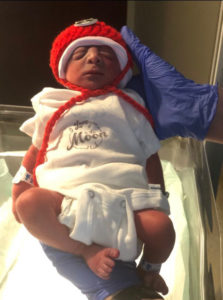 Murla set up a GoFundMe account to help his parents with medical and burial costs, but he said it was also aimed at raising awareness about anencephaly.

With Luke’s passing, the family mobilized to help move on with the burial and reach out to the public that he said has drawn “one blessing after another.”

His parents have made contact with the Anencephaly Hope Public Group, which assisted the couple. They spread the word in the media about taking precautions, which can include taking folic acid.

“It reaffirms how precious a gift life is and how much an impact it can be,” Murla said. “Time is long, but life is short, and any life can have a great impact.”

A man who in May allegedly told police “God told him to” set two Killona residences on fire — including his own — was sentenced to serve two years in prison. […]

Karl Burge, 55, of Destrehan was arrested on Wednesday (Jan. 15) and charged with two counts of possessing pornography involving juveniles (over 13 years of age). […]

Suspects are innocent until proved guilty in a court of law. […]