Brady Napolitano keeps himself busy – pandemic or no.

The Harry Hurst 8th grader may have seen his 7th grade year end prematurely, but he didn’t allow himself to stop learning. He’s begun teaching himself Spanish, as well as how to play the guitar. And while staying connected to one’s community has been a challenge at times for people worldwide during the COVID crisis, he’s found ways to volunteer his efforts for others whenever an opportunity to do so has materialized – such as going to flooded homes and helping to clearing out damaged furniture and debris, and delivering food to others hard at work doing the same.

He, along with his mother and sister, have also done food pantry volunteer work to help feed the community’s hungry.

“I really enjoy that accomplishment of knowing you’ve helped someone. It always feels good and I look forward to it when I know I’ll have the chance to do that,” said Napolitano, whose volunteerism has helped him earn a Life rank with the Boy Scouts. “When people’s homes are flooding, I want to be here and help people rebuild and help our community grow.”

In many ways, Napolitano’s kept on running, in both a figurative and literal sense. When Harry Hurst and the rest of the state’s schools closed their doors in March, cross country season was among the casualties, as was the half-marathon he had been training to run. 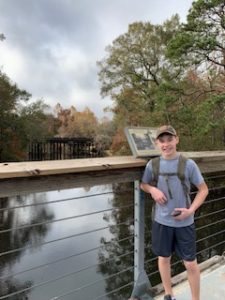 He decided to run it anyway, as it turns out, and it was less of a solitary project than he likely expected. Several members of the community cheered him on, some even making signs, as he pushed forward to the finish line.

“That made me feel really good, and made me feel like I accomplished something big,” Napolitano said. “I had already started training for it, so that made it easier to start up again. People were motivating me to finish on, and that made it something I really loved doing. I’m glad I did.”

For many people, the stay-at-home order – if nothing else – represented a chance to stop for a bit and relax.

“I started working out more towards the beginning of it, and that kept me going at first, but I just wanted to do more things,” he said. “I was getting more bored and I wanted to find something productive to do.”

He found a few things, as it turned out.

“He’s been pretty focused this whole time,” said Jamie Napolitano, Brady’s mother. “I think he was looking for a way to cope with everything going on. He’s stayed very busy and that ultimately helped him thrive during this time. I’m really proud of him.”

The sights, sounds and tastes of fall will be different in St. Charles Parish this year as two of the most widely anticipated annual events have been cancelled due to the coronavirus pandemic. […]

When River Parishes Community College – United Way welcomes students to its Boutte campus for the first time in January, it will be the culmination of what started as an ambitious, open-ended idea formed during a planning meeting. […]

by Majoria's Supermarket - 1 day ago

by Gulf Engine & Equipment - 4 days ago