When Kyleigh Baudry wanted to try out to be the Hahnville High School mascot during her freshman year, her father had his doubts. Those are long gone, now.

“I was against it at first,” said David Baudry. “She was just starting at a new school, and she’s such a quiet unassuming young lady. But when she gets in that suit, she has her own, whole other persona.”

That persona was on display before the crowd assembled on New Year’s Day at the annual Citrus Bowl college football game in Orlando, Florida. Kyleigh donned the costume of the Hahnville Tiger and performed alongside 47 other team mascots during the pregame festivities prior to the Michigan Wolverines and Alabama Crimson Tide taking the field.

“It was really special,” Kyleigh said. “Usually, when we go to camp, there’s only a handful of mascots. We kind of have to go off by ourselves. But to have so many there at once, it was so much fun working with them to do the skit and perform it out there.”

Kyleigh, a senior, got her chance along with the other team mascots as selections to the Universal Cheerleaders Association’s All-American team. She tried out for the honor and earned it for the third consecutive year.

“The cheerleaders went up to their camp in her freshman year, but they didn’t have anything for mascots,” David said. “So she didn’t do her thing at camp that time, but they did it going forward and she made it the next three years. If you’re chosen, you have the opportunity to go to Orlando to perform.”

The group practiced their routine for two days, along with the cheerleaders selected for the honor. Along with the trip, came a chance to visit Disney World and enjoy the well-known tourist attractions Orlando has to offer.

“It was my first time going to Disney World,” Kyleigh said. “I was super excited. Getting the chance to meet more mascots was great … I love making new friends who love to do what I do, too. I thought the performance went really well.”

When it came time for the performance, her father watched with pride — and David couldn’t be happier to be wrong about his first impression of his daughter’s freshman goal.

“It was incredible,” he said. “It was great to see her do her thing as a senior, in one of the last few times she’ll put the suit on after four years. The best part was seeing how she was as good as the rest of them … everyone really did a nice job. It was an awesome experience.”

Kyleigh assuredly has no regrets, either. She’s had the chance to don the costume and represent Hahnville at the Superdome during the Tiger football team’s trip to the state championship game in 2017 in addition to her Citrus Bowl experience, where she got to perform alongside other standouts from all over the country. 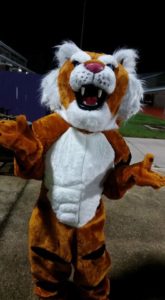 She said she decided to try out to become the mascot upon hearing the spot was open, noting it seemed like a chance to get involved from the start of her high school experience.

The senior added giving the Tiger life as its own character was especially rewarding, and one that allowed the chance to tap into her creativity.

“One thing we learned at camp was you have to give the character a signature personality,” Kyleigh said. “(The Tiger)’s a jokester. He walks around, kinda leaning back and carefree. But he’s full of energy and he wants to make people laugh. He’ll go up to people, and if they’re not paying attention, he’ll tap them on the shoulder and run away.

“I love hearing people yell out ‘Tiger!’ and tell me hi, give me a hug or ask to take a picture with them. Those moments give me so much joy.”

St. Charles Parish has made it into the movies – again.

This time, it’s in an Amazon Studios production called, “Troop Zero,” a family comedy-drama film about elementary schoolgirls recruited by a misfit girl who dreams of life in outer space and wants to be recorded on NASA’s Golden Record. She recruits a makeshift troop to infiltrate the Birdie Scouts to win a talent show. […]

Being battle-tested come district season and playoff time is a priority of the Hahnville boys basketball program. Thus far this season, the Tigers have encountered some top competition and then some. […]

Noble Huey Peyregne’s story is short, colorful and had a surprise ending – just like his life. […]