Cameron Cunningham knew he was in the mix to potentially be Hahnville High’s salutatorian for the Class of 2020, but when the call came it still left him rather shocked.

“I figured I was in the running, but also that there were a bunch of other people likely to be ahead of me,” Cunningham said. “So when Mr. (Brian) Lumar called, it didn’t really register for a bit.”

His hard work over the past four years indeed brought him to the high honor, and with news that Hahnville and Destrehan plan to hold their respective graduation ceremonies July 11, he’ll be able to walk across the stage proudly to take in that accomplishment.

That was not necessarily promised a few weeks ago, when there were thoughts a live graduation ceremony might not be in the cards as gatherings were limited to guard against the coronavirus. A graduation ceremony, he said, would at least bring everyone together one final time and add a bit of proper closure.

“It really hurt,” Cunningham said. “It was especially tough because when we first got out, I thought we were going to get the chance to go back.” 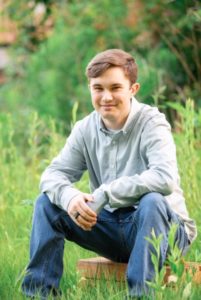 A drummer and captain of the Hahnville band percussionist section, Cunningham said not being able to attend the year’s final band events with his fellow musicians left a particular mark.

“Being in the band is easily the thing I’ll remember the most about Hahnville,” Cunningham said. “It’s the most fun I think I’ve had in my entire life, between the fun experiences with the band and the directors … it’s the closest thing you can get to being an artist while still in high school. I developed a lot of good habits and personality traits from my time with them that I want to keep with me for the rest of my life.”

Part of what made the band special was pulling together with a like-minded group of people, all working to the same goal.

“People who want to make music with you, to become a coherent unit that does something to put a smile on people’s faces,” he said. “You’re working with band directors who support each and every one of you. And you meet so many people not just in your section, but people from all over at other schools as well.”

Such is Cunningham’s passion for it that at one point, he carried aspirations of becoming a professional musician. Ultimately, he decided to keep that part of his life as a hobby. He will begin classes at the University of Louisiana-Lafayette later this year where he will major in biology, with a concentration in microbiology. He’ll s 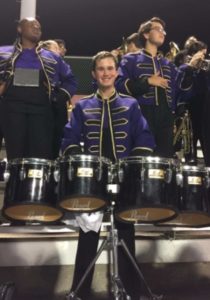 till be quite busy making music, however, as he’ll be part of ULL’s Pride of Acadiana Marching Band, playing bass drum.

Science is an interest he began cultivating in middle school, with a particular focus in taxonomy. He sees himself ultimately going into research in the biology field.

“Categorizing and classifying animals based on their different characteristics and traits was something that became easy for me to pick up on,” Cunningham said. “And I enjoy learning about different biological processes. (Biology) was just the class I really looked forward to every day.”

He noted that while he’s always been comfortable in the classroom, his course to salutatorian wasn’t paved without considerable hard work. Maintaining the discipline to stay consistent in his studies was something he credited as a major part of his success.

“Just not letting myself give up on anything,” Cunningham said. “Whenever I’d be sitting down and maybe be overwhelmed by homework for a particular class, I knew I had to keep going and get it done because if I didn’t, everything I’d worked on for all those years before wouldn’t be worth anything.”

Though last week brought its first defeat, Destrehan is off to a strong start on the soccer field this season and prepares to welcome rival Hahnville for a district showdown this Friday evening. […]

Joyce Estess Lindsay passed away peacefully at home in Hammond on January 11, 2021 at the age of 79. She was born in Marked Tree, Arkansas to Raymond Estess and Evelyn Woollums Estess. In her […]