Self-professed skeptic has been researching ghost since 2010

A room full of teens sharing a curiosity about the paranormal heard some spooky tales last week — and had a few myths debunked along the way — trading questions and answers with a real life ghost-hunter.

That was the scene at the St. Charles Parish East Bank Library last week, where David Laville of the New Orleans Ghost Hunters spoke to the assembled group in attendance and touched on a number of topics that included how the ghost hunters group began and the “weirdest” things he’s experienced in the field, while also displaying some of the tools utilized during the investigations pursued by he and ghost hunter partner Keith Cassella.

But the part that engaged the room most was when Laville began exchanging spooky stories and hypotheticals with his audience.

While McKinney participated out of her curiosity, Destrehan’s Gem Robinson, conversely, was a true believer with a specific memory in mind.

“I’ve seen my (deceased) great-grandfather at my great-grandmother’s house,” Robinson said. “Every once in awhile, I see him go out in the garden outside in the dark … I’d never met the man, mind you.”

“We just try to find answers. It’s virtually impossible to use scientific method to prove anything like this … we’ve come up with some theories on our own.” – David Laville

The New Orleans Ghost Hunters are a research team who have developed their own theories of the paranormal based on their knowledge of physics. The evidence and data they continue to collect are in support of these theories.

They have also come under criticism from other paranormal groups for questioning the validity of some of the equipment used in ghost hunting and finding flaws in the “universal theories” of the paranormal.

A good portion of Laville’s talk was more about busting myths than spreading tales, though. He showed how some of the equipment can be triggered intentionally by other paranormal-based groups to mislead others into thinking there is a positive reading when there isn’t.

“They don’t really like us much at all,” Laville quipped to laughter.

He also describes himself as a skeptic.

But the reason he and his partner have continued their research since 2010 is based on an experience they had during one of their very first investigations that year, when he said they received a call from a woman noting her daughter was hearing voices and that the mother herself thought she may have heard the same voice: that of a little girl calling out. 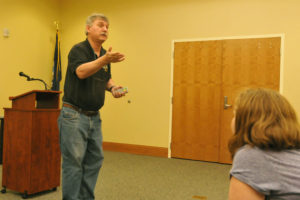 Laville said that as he and Cassela left the home upon initial investigation, they were skeptical that anything was really going on there. But upon reviewing the data collected, they discovered an EVP recording of a little girl speaking, as was described by the woman and her daughter. It was the first EVP the team had recorded.

“We told the woman that her daughter wasn’t hearing things, there was something going on in that house,” Laville said.

He may have been a bit spooked himself, as the girl’s voice was recorded calling out to who he initially thought may have been himself, to a “David.”

“The mother told me, ‘maybe she’s calling to my son.’ Her stepson was named David, we didn’t know that,” Laville said. “She said that room (where the recording took place) was where he would stay during the summertime.”

There was indeed an external voice, he said, and the woman’s daughter did not need to be medicated.

“We were actually able to help that girl,” Laville said. “It’s why we’re still doing this. We kept on going and going.”

He clarified that despite the cool name, he and his partner don’t hunt ghosts “like a hunter hunts deer.”

“We just try to find answers,” Laville said. “It’s virtually impossible to use scientific method to prove anything like this … we’ve come up with some theories on our own.”

Laville and Cassella formed the team after a dinner discussion about their personal experiences with the paranormal and with the knowledge that New Orleans would be an ideal haven for the project. The two never charge for their investigations.

The Q&A was the latest in a series of events planned at the library to draw the attention and interest of young people in the community.

“I thought there’s interest in this type of thing, and it had been done with some success at other libraries, so I thought let’s try it,” said Library teen services programmer Taylor Sardegna. “I thought he stayed on point and kept it relevant and interesting to the kids. And you couldn’t help but get drawn into those stories.”

The Friday night lights will actually be shining a day early this week for Hahnville, as the surging Tigers spring into action Thursday night to visit Terrebonne in the final week of the regular season. […]

A new medical assistant program will kick off in January at River Parishes Community College United Way campus, and the organizers said the offering is an excellent opportunity for students to break into the medical field. […]

A man was shot Tuesday evening at his Villere Drive home in Destrehan following an apparent traffic incident.  […]