With a cast of his fishing line, Danny Simoneaux explained he was on his second day of fishing at the Bonnet Carre’ Spillway and pleased with the 30 catfish he caught in the area.

“It’s pretty good,” the Norco resident said of his catch on Tuesday. A day earlier, Simoneaux was bringing in shad by the hundreds with every swipe of his net in the swirling water rushing against the culvert of Spillway Road, which was still substantially covered by water that overtook the area when the U.S. Army Corps of Engineers opened the spillway last month.

An avid fisherman, Simoneaux said he is a fixture at the spillway.

This is especially so during the flood, which brings a bounty of freshwater fish that has lured both fishermen and a flock of birds eager to get an easy meal from waters brimming with fish.

As Simoneaux used his net to catch shad, he tossed a few on Spillway Road and set off a feeding frenzy with a flock of squawking seagulls.

Nearest the bays, a flock of pelicans patrolled back and forth, and they caught fish, too. Above, bald eagles maneuvered their powerful wings to the water and returned with lunch trapped in their talons.

For Simoneaux, who said he’s been fishing the spillway since he was three years old, this was a good day. 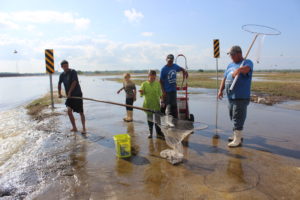 Jared Adams, also of Norco, had brought his son, Mason, to the spillway for the experience. Asked his age, the youngster focused intently and formed his hand to show four fingers.

“I caught five to six fish today on my first day fishing,” said Adams, who had been using river shrimp as bait. He’s an occasional fisherman who wanted to show his son how to fish.

Also on the road, Kenneth Alphonse of LaPlace wasn’t impressed with what he caught that day, saying he caught more fish when the water was deeper. He also maintained the 2016 spillway closure left so much fish in the flood waters that they covered the top water.

Robert Williams of Kenner had dropped his line and was eager to catch catfish. So far, he had caught one but Williams said he’d just gotten there from work.

“I love to fish,” he said. “I already knew I was going to come before I got off work. I love it.”

Williams displayed the catfish he’d caught with his rod and reel, and using worms for bait.

Throughout the grassy areas of the spillway, fishermen dotted the landscape and more arrived later in the day.

David Jones, of Destrehan, was ready to fish. He was going to find a calm spot and drop a line for sac-a-lait.

On his second day at the spillway, Chad Guillet of Destrehan had caught three catfish with shiners. They were biting best, he said, at sunrise and sunset.

“They bit immediately and I’m not even an experienced fisherman,” Guillet said. “It’s nice to be able to come from 10 minutes from where I live and fish.”

Chris Brantley, project manager at the spillway, also expected crawfishing to improve as the water continues dropping and warms.

Fishermen are clamoring to both sides of the partially submerged Spillway Road, as well as higher ground in the spillway.

“We’ve got a number of eagles,” Brantley said. “A birder there over the weekend counted 38 eagles.”

People are accessing the area by boat and by foot on the dryer portions of Spillway Road, which only days ago was submerged in the Mississippi River waters from the spillway opening to Lake Pontchartrain.

Two boat launches are open at the Mississippi River and by Airline Highway on the LaPlace side of the area, he said.

As anticipated, once the spillway was closed last weekend, Brantley said limited access to the recreational areas began.

The U.S. Army Corps of Engineers is now issuing permits for four-wheelers depending on the condition of the area, he added.

In March, with the river flush with the rainwaters from the north, water flow surged to 1.25 million cubic feet per second and triggered the spillway opening on March 8. The opening made the 12th time in its 87-year-history that it was utilized to ease the floodwaters.

“A good bit of 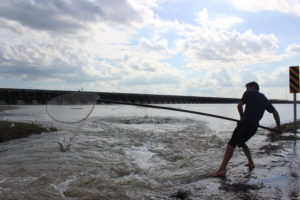 the spillway will still be flooded due to leakage so some areas may remain inaccessible,” Brantley said. “As long as the river remains high there will be leakage and it won’t quit until the water level reaches below 12 feet and then the spillway will begin to drain and it’s occurring now.”

Also, he cautioned visitors to be watchful of culverts through the spillway that go under roads that may be submerged, he said. Visitors have been injured on them in the past.

Wanda Mae Neff Allen, born on February 20, 1966, died peacefully on January 4, 2022. Originally from Allentown, Pennsylvania, she lived in Hahnville, Louisiana for the past 45 years. Visitation will be from 5:00 pm […]

Destrehan’s been trying to weather the storm early in the 2021-22 season, meshing several young new faces in with their more experienced counterparts amid a rash of injuries, but their recent results show the Ladycats’ determination. […]