Domino’s Pizza has set up a trailer to continue operations behind the former restaurant building that was destroyed after a gas leak last Wednesday.

Paradis Fire Chief Oliver Dufrene said the explosion blew the front windows completely off the building and displaced a wall three inches off its frame. 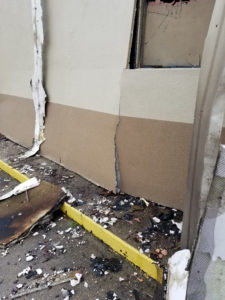 Paradis, Luling and Hahnville volunteer fire departments, along with guest members from a nearby training session, responded to the call last Wednesday, putting about 20 firefighters at the scene around 12:16 p.m. They brought the fire under control within a half hour, but the building was a total loss.

Dufrene praised the assistance received from the St. Charles Parish Sheriff’s Office and EMS at the scene. 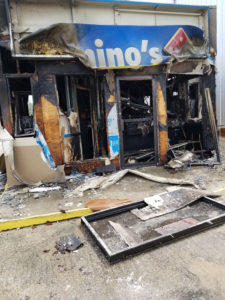 An investigation determined a contractor installing a gas line for the new neighboring Domino’s building under construction “hit a gas line under the building,” Dufrene said. “They hit the line, gas got into the building and they evacuated the building.”

The state Fire Marshal investigated the fire and confirmed it was caused by the gas leak.

Dufrene said a worker at the new location described the explosion as “more of a woof than a kaboom.”

“They had some gas in the building, but it wasn’t fully gassed,” he added.

Glenn Mueller, Domino’s owner and franchisee, said the store had been closed by the gas company at about 11 a.m. due to a leak outside the building. Three to four workers were evacuated while the gas company worked on solving the issues.

“About 30 minutes later, fire erupted and destroyed our current building, but not the new one under construction,” Mueller said. “Our franchise is currently working with the local officials on a temporary store to preserve jobs and continue serving our customers.”

Workers have been given work hours at nearby stores in Destrehan and Houma, he said.

Mueller said the location that burned had served the area more than 25 years. The new location, which is under construction, will open this summer.

District Manager Palfrey Polk said they should occupy two-thirds of the new building by late April. The company is advertising for a tenant for the remaining space.

In the meantime, a temporary trailer used by the company for hurricanes and events has been placed in the rear parking lot of the current site.

Described as a “store on wheels,” Polk said the plan was to begin serving to-go food only and then the full menu by this week.

He added, “It has everything of a store but on a smaller scale.”