Elizabeth Hall praised the generous donations that are helping cover her partner Michael Atkinson’s funeral, but she choked back tears as she recounted the hit-and-run accident that claimed his life on New Year’s Day.

The Des Allemands man, 60, was returning home on his bicycle from his job as a dishwasher and prepper at Spahr’s Seafood restaurant when he was hit by a vehicle from behind on U.S. Highway 90 and left dead on the side of the road.

Soon after, Louisiana State Police announced they arrested Juan Lujan of Luling and charged him with felony hit-and-run driving, improper lane usage, no driver’s license and a falsified inspection sticker.

Troopers connected Lujan to the crime by his 2002 GMC Envoy SUV, which was reported by witnesses.

Hall and Atkinson weren’t married so she couldn’t legally have his body cremated, but a donation recently made it possible to bury him. Hall made the arrangements on Friday to have him buried in the Garden of Memories in Thibodaux.

“Him and I have been through a lot,” she said.

Hall said donors have also helped with flowers for the funeral, as well as covered this month’s rent on their travel trailer in the Vanacor Park and Campground, also in Des Allemands.

Park owner Diane Vanacor said the couple had been living there a year, having been flooded out twice.

Hall said they had been homeless for a while and moved to Independence where they stayed five years.

“That’s when we lost everything in that last flood and moved here,” she said.

Of their two years in Des Allemands, Hall said her children and grandchildren had come to refer to Atkinson as “Dad” and “Papa.”

Hall said she heard the driver accused of killing her partner was released and then turned over to immigration where he’ll stay until he goes to court.

The extent of Atkinson’s injuries lend to her belief that Lujan was speeding when he allegedly hit Atkinson with the SUV and fled the scene. Hall said Atkinson had a broken neck, a broken back and head trauma.

“He hit the windshield, flew back and landed by a mailbox,” she said. “His bike was a disaster. His shoes were on the ground.”

Atkinson, a native of Alabama, was only 15 minutes from his residence when he was killed. State Police put the time of the incident around midnight, but Hall said his body wasn’t found until around 2 a.m.

Shortly after the gruesome discovery, troopers came to her door and told her Atkinson was dead. Her grandson went to the scene to confirm what happened.

Hall didn’t have the heart to go to the scene of the crime.

One of the couple’s Chihuahuas sits at the window every day waiting on Atkinson’s return.

“He was a very funny guy and a hardworking man, and I loved him dearly,” she said. “I miss him dearly.” 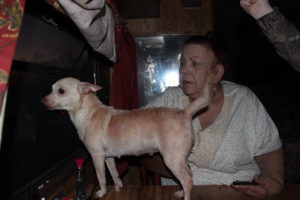 With family living in the Lake Charles area, Emily Gautreaux quickly heard a firsthand account of the damage wrought there by Hurricane Laura. […]

Luling brothers schooled at home, but do much beyond it

Jonas and Micah Baamonde have been able to impart some wisdom to friends and fellow students figuring out how to apply themselves in a new educational landscape. […]

by Majoria's Supermarket - 3 days ago