Morgan Timberlake found a way to honor her grandmother in a number of ways – and to do some good in the world for those who need it.

The Destrehan High School senior is holding a car show March 22 to benefit childhood cancer research and treatment at the West Bank Bridge Park in Luling. Cars, trucks, rat rods, motorcycles and more will be on display at the free admission event, with proceeds from entries and refreshments donated to Children’s Hospital of New Orleans.

Timberlake’s grandmother passed away three years ago after a battle with cancer. Timberlake said her grandmother, and grandfather as well, had a lot of interest in motorbikes and vehicles, and thus “we kind of put this together,” Timberlake said. The event doubles as her senior project at DHS. 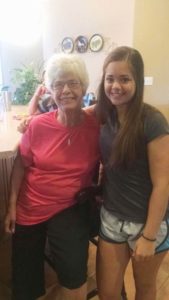 “I grew up over there,” Timberlake said. “She would take me to ride on her motorbike … I was always around. My uncle had a motorbike, my aunt … I’ve always been around car show types of people. I kind of developed my own interest in it and that all got me into it. We have a big family and all of us love kids, so this seemed like a good way to mix it all in.”

Timberlake’s father is also a mechanic, so the concept is far from foreign for her.

“I’ve always been around guys a lot, hunting, fishing … this is kind of my world,” Timberlake said.

Raffles and 50-50 drawings will also be at the event to raise proceeds. Timberlake said she’s asked for some donations to go toward prizes for those contests.

The cause means much to her because she remembers the toll it takes on a loved one battling the illness, as well as on their families.

“I watched my grandma go through it, and how she went down so fast from it,” Timberlake said. “Knowing there was really nothing we could do to help her. I know the struggles that come with the money it takes for all the testing and treatment family goes through.” 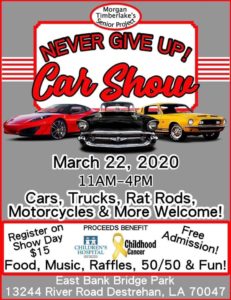 She hopes the proceeds help toward that end, as well as helping to fuel the research needed to one day find a way to beat the illness for good.

“You’d like to help them research so they can come out with better treatments to get rid of it faster,” Timberlake said.

“A lot of people are sharing the flier, so it’s kind of exciting,” she said.

Hair was cut and braided, fun games were enjoyed and over 200 backpacks full of school supplies were given away at Saturday’s annual Back 2 School Giveaway in Boutte. […]