Will Matthews has long understood what makes a winning recipe — only these days, that statement stands much more literally.

Matthews, a Destrehan High School alumnus whose standout play as a Wildcats’ running back earned him a football scholarship at Kent State, has brought southern Louisiana cuisine to his campus and the surrounding areas in Kent, Ohio, via his budding mobile food service called Southern Comfort.

He and his business partner Zack Mottershead, a fellow senior in Kent State’s Entrepreneurship program, invested their own money into buying a food truck to carry and sell New Orleans-style Cajun and Creole cuisine in their area. The two raised money for approximately a year at different “pop-up” fundraising events to help reach their goal. The two also invested their savings into the project, and got a boost from earning second place and prize money along with it for a competition put on by the business school.

Their hard work paid off, and they were officially able to launch the business this fall.

“It was definitely a leap of faith,” said Matthews. “A huge leap of faith to finance a truck while I’m still in school. God put in my heart that this was something that could be done, so I was determined to move forward.”

Jambalaya, seafood pasta, red beans and rice, sausage etouffee, sausage po’boys, beignets and gumbo are among many of the items prepared for Southern Comfort outings. Matthews said the truck usually ventures out three days a week.

“We have a nice variety. We made the menu like it is so it’s not boring,” he said.

And the feedback, pun intended, has been pretty great.  Is that spicy New Orleans flavor blowing the Ohio natives away?

“I think so,” Matthews affirmed with a laugh. “Blowing their taste buds away.”

This particular journey began innocuously enough. Matthews missed the food from back home after some time at Kent State. His solution was to begin preparing it himself so he’d no longer have to miss out, and he gathered some recipes from his mother and father, both of whom worked for years in the food industry.

Growing up back home in St. Charles Parish, he wasn’t really a cook —“My parents did the cooking so I never really cooked much at all,” he said. But he’s developed a passion for it quickly, and began to share his budding culinary talents with his friends, classmates and teammates.

“I really started to like it,” Matthews said. “I started to experiment with things and I really liked that part of it, seeing what tastes good and what can make it better. Then hearing the reactions from people who enjoy what I made, it really drove me to keep doing it.”

He started to dream on his newfound skillset.

“I started thinking, I could maybe open up a restaurant doing this,” he said. “But that’s really expensive. So, OK, I have to think of something more cost-effective.”

The food truck is what he eventually settled on. Majoring in entrepreneurship, Matthews was able through one of his classes to develop a business plan and investigate the viability of his ideas. There he met Mottershead, who liked the prospects of such a business so much he wanted to get involved, and the two formed a partnership. 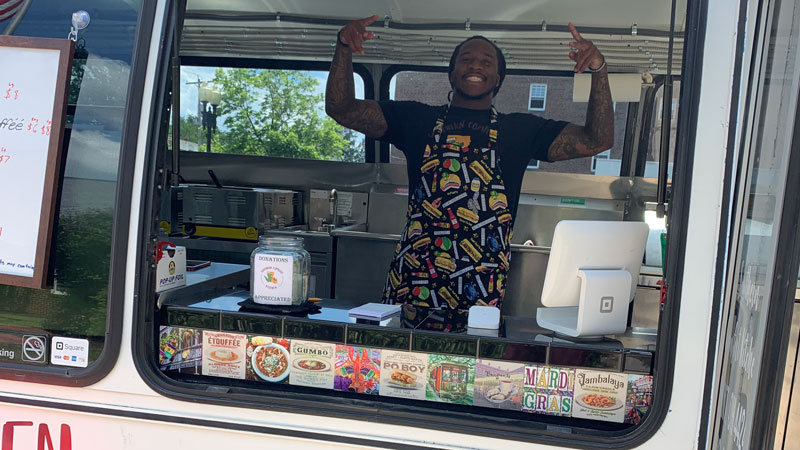 One thing that helped matters was an understanding coaching staff with the football team—one that helped Matthews turn a negative into a positive. While Matthews and Mottershed were considering entering the business school’s competition—which eventually netted them $8,000 in prize money toward their venture—it seemed there wouldn’t be reasonable time to complete an application and enter given Matthews’ football commitments.

Matthews was dealing with a minor injury last year which sidelined him from being able to actively practice or play in games. His coach, knowing what Matthews was attempting to accomplish off the field, gave him the green light to take some time away to focus on getting the business off the ground. The prize money from the competition went a long way to making it a reality.

“They trusted me to manage my time wisely and knew I’d be there mentally with the team,” Matthews said. “It meant the world to me. It provided me the opportunity for the business and still be able to return to the field whenever I was healthy.”

“People were waiting to try the food,” Matthews said. “They don’t have that type of food out here … when we got that feedback, where the crowd didn’t drop off and we had a lot of the same people back and new people along with them, it made me think this is definitely something that can grow.”

Indeed, his business seems on the road to success — by making its name on the road.