Before heading off for school each morning, Kailie Carrigee has long heard the familiar refrain from her mother, Korie: “Be kind. Be humble. Be generous.”

The Destrehan High School junior doesn’t just pay that lip service. She backs it up with regularity. When Carrigee turned 9, she asked her parents if she could give to other children rather than receive birthday gifts of her own. Carrigee went on to collect more than $500 worth of toys and games to donate to Children’s Hospital.

That selfless act began an annual tradition of charity that continues today. For her Sweet 16th birthday this year, she’s celebrating by collecting donations for Second Harvest Food Bank to battle food insecurity, which has become a particular problem due to COVID-19. The drive, which has seen a strong response already, will culminate on Aug. 1 where she will collect donations from 2 p.m. to 6 p.m. Those interested in donating are asked to contact Carrigee on Facebook to receive the address. She is seeking vegetables, rice, beans, peanut butter, canned tuna, fruits and other canned goods.

“I know the New Orleans area was really hit hard by the pandemic,” Carrigee said. “Food security can be an issue for some families and I wanted to help out. This was a way to help out locally in our community. I think it’ll have a great turnout.” 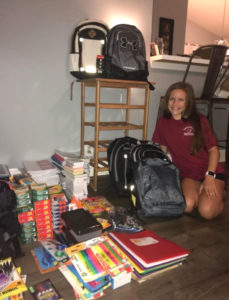 She credited her parents for instilling in her the importance of giving as she’s grown up. The feeling of helping another, she says, has few comparable.

“It’s incredible to have the opportunity to make a difference and make a change,” she said. “Sometimes, you can see you’ve really helped someone, and it just feels really good to be a part of that.”

Her food drive got a major assist from Dat Dad’s Club of Luling, which heard her story and collaborated to give Carrigee a running start. The nonprofit collected donations outside of Majoria’s Supermarket on Saturday, with each participant entered in a raffle for a 50-inch television. The number of donated items and funds makes it just about a lock that Carrigee will surpass her goal of 1000 canned goods and $500 to give to Second Harvest.

The raffle item itself even represented a helping hand, as it turned out – the woman who won had just seen her own television break down.

“She said she almost started crying … she had no idea she’d even have a chance of getting a new one. Small things like that make my heart smile,” Carrigee said.

Carrigee’s brought smiles to many others through her birthday tradition. Following her trip to Children’s Hospital, she found another worthy cause for her 10th birthday, collecting more than 100 pairs of shoes to donate to orphanages in Haiti, following a major earthquake there. Her cousin, who helped build an orphanage there, helped facilitate that project.

For her 11th birthday, she collected blankets for the Wounded Warriors Foundation. When she turned 12, she held a book drive for the students of St. Charles Parish’s Head Start program. At 13, she donated more than 500 items to the Matthew 25:35 Food Pantry in Destrehan, where she was a volunteer. 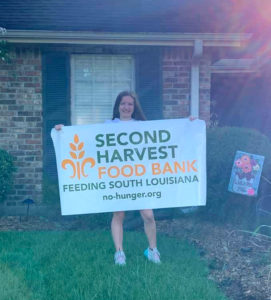 At 14, Carrigee donated 15 backpacks she filled with necessary school supplies for local middle school students. And at 15, she joined forces with New Orleans Saints punter Thomas Morstead’s “What You Give Will Grow” foundation by collecting toys and games for teenagers in need of extended hospital care.

At Destrehan High, she’s also a leader on campus. Carrigee is vice president of the Interact Club, co-captain of the Desty Darlings dance team and a member of Beta Club, Mu Alpha Theta, the Fellowship of Christian Students and Superintendent Ken Oertling’s Student Advisory Council. As a sophomore, she was her class’s Student Council president.

She admits it takes a lot of energy to be as active as she is. She’s also quick to credit others for their roles in helping her accomplish all she has already over the years.

“It’s not possible without my friends and family who have done so much, from donating to sharing my stories on social media. That’s really how you get something like this started,” Carrigee said.

For those interested in offering monetary donations for Carrigee’s Second Harvest drive, they may do so online by visiting http://support.no-hunger.org/site/TR/FoodampFundDrives/TeamRaiser?team_id=1540&pg=team&fr_id=1100.

With Hurricane Ida coinciding with United Way of St. Charles’ annual fundraising campaign, there was concern that the drive might not meet expectations given the storm’s far-reaching impact. […]