Keva Peters Jr. saw his interest in film sparked while a student at Destrehan High School, and it didn’t take very long for that spark to create an inferno.

Peters, who studies film at Dillard University and whose documentary “The Bigger Picture: African-American Representation in Film” earned Most Outstanding Entry among Louisiana high school students in the 2018 National History Day competition, says his life’s path became clear to him around the time he started working on that project.

The work, he said, didn’t feel like work at all.

“I’d work on it until 4 in the morning and then wake up at 6 to go to school,” Peters said. “And I was fine with it. It didn’t slow me down, because I was looking forward to getting to class and what we’d talk about that day.”

He hopes to make a career in film direction, and is enjoying the journey toward that goal. Already, it’s shaped many of his major life choices. He chose Dillard because of his love of film. He met his mentor and some of his most influential guides through his documentary, and his confidence in himself grew immensely when he saw how far his first major project took him – all the way to Washington D.C., where the fateful competition was held, in fact.

Currently, he’s working on the script for another project, one he plans to dedicate to the friends he has lost due to gun violence, as well as to the lives of others suffering that fate.

But his path as a filmmaker started at DHS, where he said an elective changed his life forever.

“Intro to Film Class, with Miss Vicknair,” Peters said. “I just thought, ‘OK, that sounds great to round out my classes this semester. But I ended up really liking it. We learned about all of the stuff that goes into film, types of film, how it can be used for good and bad and the hidden messages behind a lot of stories.”

Immediately, Peters found himself among the most vocal students in the course.

“(Vicknair) and I would have what almost turned into these one on one conversations in class,” he said. “It just really got my interest.”

He took more courses from there, and his hands-on experience grew. He learned how to work with the camera and with microphone equipment, and ultimately how to take a scene from stage to screen.

All the while, he was reading up on film directors worldwide and learned as much as he could from their stories. Once Peters started studying at the St. Charles Parish Satellite Center, he credits teacher Hunter Robinson as someone else who helped him harness his ability. 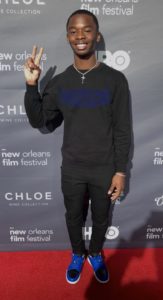 “He kind of acted as a production company owner, and treated us as his directors. If he got stuck, then he stepped in,” Peters said. “He taught me to rely on my instincts and trust in my talent.”

When it came time to create The Bigger Picture, he researched those who could help him convey message out most effectively and sought them for insight and interviews. His inspiration was that this topic was something he felt he hadn’t yet discussed in a class setting.

“The impact of film on people’s day to day lives and on people in the industry,” Peters said. “I came up with the subject of the history of African-American representation in the film industry from there.”

He pointed to the 1915 film The Birth of a Nation, a silent drama directed by D.W. Griffith.

“It was a cinematic masterpiece, but also at the same time, it led to the rebirth of the Ku Klux Klan,” Peters said. “Which of course had a huge impact on the day to day lives of African-Americans in our country.”

His overall takeaway was that despite a natural ebb and flow to progress, things have moved forward and consistently improved over time.

“There are good times and bad times, but when you constantly see improvement, you should continue down the path,” he said.

The positive reception to his film emboldened him in his desire to make it in the film business.

“It showed me how far my passion and desire for this could take me,” he said.

Peters, who started a GoFundMe page to help get his new project off the ground (titled Funding Short Film), has been energized by the script-writing process once again. This won’t be a documentary, but a short story inspired by the painful and too early loss of close friends. He’s taking on an emotional topic, but he said he believes the time is right to tell this story – one that he finds he doesn’t have to look for. The inspiration comes to him.

“I’ll go back to the neighborhood where we hung out … when I see something like a tree my friends and I would play on, I take notes. I’ll have two characters just from that tree. I let the message come to me rather than the other way around … I realized I have to place myself in the world I was once in when I lost my friend,” he said.