For Robert Stringer, what began as a curiosity grew into a passion.

The Destrehan High School alumnus recalls his wife asking him last year what he’d like for Father’s Day.

Stringer had been watching the YouTube series “The Hoover Boys,” where the hosts explore the outdoors each week with their metal detectors in search of lost treasures from the past with historical value.

“They’re a big group in Maryland, and they would find all these old copper coins from the 1700s and 1800s. They’re digging up old relics and they tell you a little about each object they find,” Stringer said.

Stringer was fascinated by it all, and says he’s not the only one. 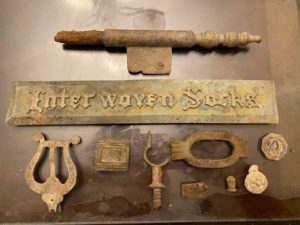 A hobby was born, and soon thereafter a partnership. Stringer was put in contact with fellow metal detecting enthusiast Paul Milner via the former’s wife, who works with Milner. Milner, she said, had been exploring the hobby for three years, so why not join with him for some expeditions?

They joined for more than that, forming the group River Parish Metal Detecting last summer. The two have explored City Park, old Jefferson College in Convent and various spots in the River Parishes. The group doesn’t do anything without receiving permission from the property or land owner of the prospective area (or the appropriate person responsible for giving such permissions).

“That’s partly why we made (River Parish Metal Detecting),” Stringer said. “To get more permissions, and show people that hey, it’s not just some guy with a metal detector coming in to disrupt things. It is to show it’s official and professional. We work together to get different permissions and cover ground there.”

They’ve found some interesting artifacts already, including a lock to a gun and bullets from the Civil War era. A Civil War medal was found underground at a Garyville residence. A French coin from 1855 is another discovery.

“We often go multiple times a week,” Stringer said. “When there’s good weather, I’ll go after work. It gives me my time of peace.”

“Anytime we go somewhere, we’ll find something old,” Stringer said. “We pick our sites, do the research and get our permissions. They enjoy seeing what comes out of the ground on their property.”

The hobby is one enjoyed by the next generation as well. Stringer’s son, Cruz, has accompanied the detecting duo on a few excursions, which not only provides for some father-son bonding time, but also some educational value on the side.

“On weekends when he’s out of school, he comes along and is right there with me and Paul,” Stringer said. “He loves it. And it’s a good learning opportunity for him. He learns the history as it comes out the ground.”

Nothing completes a great recipe better than fresh herbs straight from your garden. Have you ever pulled out a recipe that calls for a specific fresh herb, gone to the grocery and couldn’t find it? Or you find it but it’s not the quality you want? Homegrown herbs to the rescue. […]

Burton “Socko” “Chief” Schexnayder passed away on February 14, 2020 at the age of 91. He has now rejoined his late wife Leola Schexnayder in their eternal home. He was the proud father of Morgan […]

Destrehan has scored its share of postseason upsets and near upsets under coach Jhovanny Santamaria, but on Saturday, it was the Wildcats’ turn to ward off a lower seeded team with ambitions to shock their hosts – and it looked bleak at first. […]