Rachel Giammolva said she knew it might take years to raise the money she needed to secure a diabetic alert dog for her 7-year-old son, Luke, who suffers from Type 1 diabetes and must be constantly monitored due to the serious danger the illness represents for him.

The Destrehan mother said that over the summer, but as it turns out, her story touched many – and as a result, Luke’s canine guardian will soon be on the way.

Through the donations of many in the community, as well as the efforts and generosity of several charitable organizations, $20,000 was raised for the cause, and the process of matching Luke with an alert dog is full steam ahead. A prospective dog is being trained for the task, and the family has been told the dog should be ready no later than May.

“I can’t put into words how much this means,” Giammolva said. “There’s no way to express it … friends, family, strangers, different organizations, we’re so incredibly grateful for so many people. To have that kind of support, the way we live day in and day out, it just gave us that little extra ‘oomph’ to keep going.” 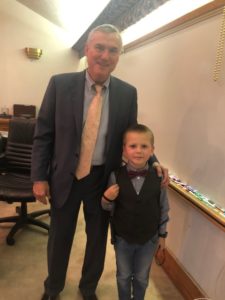 Type 1 diabetes is a much more serious form of the illness, which can also be classified as the more common Type 2. It causes the body to create little or no insulin. Luke receives up to five shots a day of insulin and has a continuous monitor for his blood sugar. There is no cure for the illness, meaning he’ll continue to have to deal with these things in some form going forward.

The most difficult aspect of it is Luke lacks symptoms when certain things are wrong – with Type 1 diabetes, high and low blood sugar levels are dangerous, the low side more so. But without an alert from his monitor, he may never know, much less his parents, that he’s in any danger, and the monitor is not infallible.

Were the monitor to fail, the worst case scenario could be fatal, and there have been points where his levels fell during the night, triggering the alert for his parents to respond. The uncertainty at all times have made it a harrowing experience for the family since Luke’s diagnosis in July of 2018, and Giammolva called it completely life-changing.

It seemed like it would simply be their new normal going forward, but she found hope upon researching the utility of trained diabetic alert dogs, specialized service animals. Through saliva, the trained canines can sense a drop or rise in their owner’s blood sugar levels long before a continuous glucose monitor (CGM) does. A trained dog would know to retrieve insulin if needed.

Funding was the challenge, as an alert dog’s cost can be prohibitive when considering the necessary training and skill set required by the animal. Giammolva started by posting a GoFundMe page, which began to garner donations from those hoping to help. News of Luke’s plight began to spread – the boy has even made his television debut for a profile piece detailing his situation – and more and more helpers began stepping forward. Dat Dad’s Club of Luling held a pool party fundraiser in July, the first of several groups to coordinate efforts to help, among them Luling and Boutte Lions Club, St. Charles Rotary Club and A Child’s Wish of New Orleans. 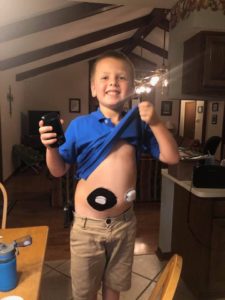 The prospective dog is training with a family in New Hampshire currently. The Giammolva family has sent glucose samples to assist with that effort. Giammolva said Luke hasn’t met the pup yet, as the trainer suggested a meeting not happen until the dog was ready, lest Luke get attached – it is only the most likely candidate at the moment, but it could be another dog undergoing training sent to Luke were the initial dog not cleared.

“They say it could be before that time as well, but no later than that,” Giammolva said.

The dog represents a light at the end of the tunnel, though, and peace of mind. That’s something the family has yearned for. Luke was recently hospitalized following complications from a cold coupled with his condition, a scenario that’s become too common over the past two years. He’s also had an insulin pump added to his care about a month ago, but the transition to that has been difficult.

“You have to get the right ratios of insulin … I think once the process is fleshed out, it’ll be better, but right now it’s been up and down,” she said. “We’ve had a few scary nights over the last month. In the back of my mind, I’ve had that thought, ‘The dog would have picked it up a lot earlier.’ It’s an awesome tool, but like the monitor it’s not 100 percent accurate.”

She recently made a post on Facebook thanking everyone who stepped up to make Luke’s pup-to-be a reality. With November representing National Diabetes Awareness Month, as well as Thanksgiving, she felt it made for appropriate timing.

Luke is also excited, and told his mother that he knows he’s going to fall in love with the dog.

“We’re all so excited,” Giammolva said. “Everything’s been so overwhelming and very humbling. I wish I could better express just how appreciative we are for everyone.”

Saints Place Subdivision is being replaced by a large warehouse

Plans for the Saints Place Subdivision have been withdrawn to make way for a “regional style warehouse” in Destrehan. […]

A red hot start by Brother Martin ultimately left Destrehan in a hole it couldn’t climb out of in Wednesday’s second round Division I boys soccer playoff matchup between the teams at City Park’s Pan American Stadium. […]

For more than 20 years, St. Charles Parish schoolchildren have enjoyed the annual Heritage Day festivities at Destrehan Plantation, and along with it the chance to “go back in time” to experience some of the most significant events of the 1800s. […]