Barry Guillot became a teacher to make a difference, but he didn’t anticipate Wetland Watchers having an impact in China.

“I just finished a really interesting interview with researchers at Columbia University and an educator from China interested in writing modules for Chinese middle schools that involve their students in real-world sustainability issues and strategies to give their students a voice in their communities,” Guillot said. “Wetland Watchers Service-Learning Program is one of the programs they chose to model.”

Service learning is an educational approach that combines learning objectives with community service to provide a learning experience while meeting societal needs.

“They’re looking for ways for the students to have a voice in their community, and like the way with the Watchers that the students are doing the speaking and outreaches,” Guillot said. “I really felt good about that because that’s one of the things I felt was strong about Wetland Watchers. I always told the kids you have no right to complain how things are going if you’re just sitting in the stands. You really need to be down in the field playing to make a difference.”

Researchers, which included a member from China, interviewed Guillot for an hour and completed four hours of paperwork about the program. Part of the discussion was about teacher buy-in and how to get students to stay after school for the program, as well as focusing on tests.

Despite students having activities competing for their time, Guillot said they still make room for Wetland Watchers. 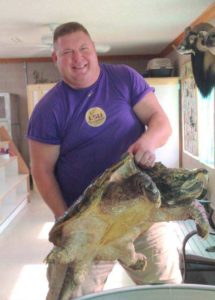 “I think they are really excited about the passion of the students and the commitment they have and how they replicate that so the middle school students are excited about learning,” Guillot said.

The discussion focused on giving children a voice and solving real world problems.

Guillot said Wetland Watchers ranks as one of the Top 10 sustainability educational programs in the U.S.

Service learning can even help students make vocational choices, he said. Many Wetland Watcher students have gone on to work in environmental sciences and become vets.

“It takes a lot of extra time on my part, but you see that learning, enthusiasm and excitement and that’s what I love to see in the kids,” he said. “I always say I became a teacher so I could make a difference in other people’s lives. Maybe, something I did will fix somebody in China now.”

Guillot said that with any country, the young people are their strength.

“I mean if these young people are given some freedom to solve some of the problems that they have then they maybe can see that as a good thing,” he said. “That’s their future.”

Judy Marie Boudreaux Guhman passed away on July 31, 2020 after a long battle with carcinoid cancer at the age of 78. She is survived by her beloved husband of 53 years, George H. Guhman; […]

When Roy Lunk wrote his first book on the history of his home community of Des Allemands, he had modest ambitions – perhaps a few hundred people would take interest, he thought, and at the very least his children would have a reference point to learn about the rich history of their home. […]

With all the coronavirus-related uncertainty surrounding the upcoming school year, one thing is certain – 700 students from St. Charles Parish will have the school supplies they need to kick off a successful academic year. […]