Michael Love of Norco was still a bit in awe after experiencing a taste of virtual reality at the St. Charles Parish East Regional Library.

“It was really cool. You put on the helmet and it’s just a feeling of, ‘wow, this is so awesome,’” the teen said after taking his turn to put on the gear. “One second you’re putting on the headset and suddenly your whole environment transforms, like you’re a completely different person.”

It wasn’t the only technology that appealed to Love at the library’s Tech Con 2.0, the all-ages event held for its second year after a successful debut in 2017. The technology fair allowed visitors a chance to check out some of the new-school features and technology available for use at the library, as well as a few additional features to make for a fun trip with plenty of hands-on activities.

Among the fair’s attractions was the virtual reality room — seemingly the most popular draw, judging by the attendance and line to participate — a 3D printer demonstration, mini-bots (small, attachable robot blocks that move and perform different actions depending on how they’re assembled), a scratch animation lab, a photo booth, a “Makey Makey” floor piano that plays when each “key” is stepped on, and an analog craft sewing table.

Love had a particular appreciation for all of it. According to his mother, Connie, he wants his future career to be involved with technology, following in the footsteps of his father, an I.T. worker.

“He’s always trying to learn,” Connie said. “Technology is something he directly identifies with. It’s amazing to see what’s out there, the innovations. I love it. I wish we had more programs like this.”

He’s not alone. Library team programmer Taylor Sardegna said the idea for the event came to life because more and more young library visitors have voiced their interest in technology.

“It seems to be the trend,” said Sardegna. “That’s what kids want and what teens are asking for. So I wanted to incorporate that into our programming in some kind of way.”

Sardegna admits she’s not the most technologically savvy person herself, but she saw a chance to provide an atmosphere where children would be eager to learn.

That instinct was a sound one. Last year, the first installment of the event brought more visitors than she anticipated. 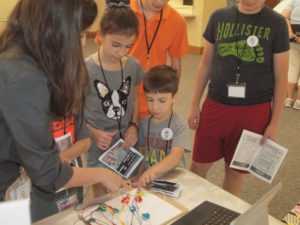 “We thought we may get a few people, but we had around 100,” Sardegna said. “We had to bring it back. It gives us the chance to show the public the technology the library has and that we can use for programming, so that they know they can come in and use it themselves.”

For her, the best part is seeing the reaction of youths like Love.

“They’re wide-eyed, asking ‘Where’s the VR room, where’s the 3D printer,’” she said. “And that’s really great and it’s why we’re doing this. We can show people that the library isn’t just about books or a place to come and have to be quiet. It’s fun and we can introduce you to new things you may not see in everyday life.”

While Connie brought her son for him to enjoy the features, it doesn’t mean she wasn’t impressed herself.

“Technology is something he really identifies with,” Connie said. “We love it and he loves it.”

Love sees it as the way the world is going.

“I like everything about (Tech Con),” he said. “A lot of what’s here is going to be regular in the future. Right now, they’re just developing more stuff.” 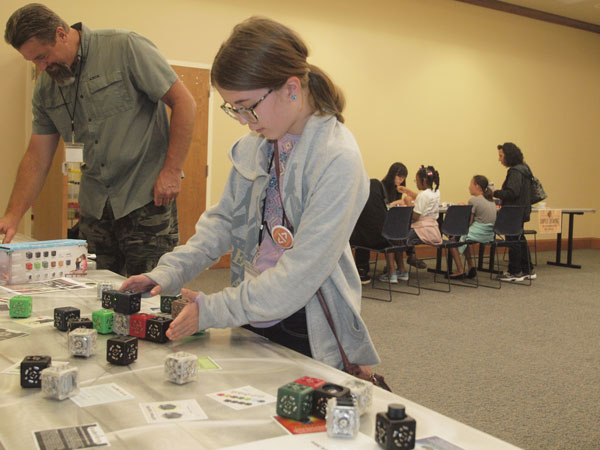 On June 8 Doris Charles’ life was forever changed – the life-long St. Rose resident experienced a total loss of her home in a fire that was caused by a neighboring blighted property. […]

Police searching for driver who struck, injured 4-year-old in hit-and-run

St. Charles Parish police are searching for a vehicle and driver involved in a hit-and-run incident Sunday in which a 4-year-old child was struck and seriously injured.  […]

Suspects are innocent until proved guilty in a court of law. Arrests • Jeanee Lumar, 32, of 351 Boutte Estates Drive in Boutte, was arrested July 14 and charged with aggravated assault, aggravated second degree […]