Living longtime dream in name of good cause

Erik Elsea has had a paddle in his hand since before he can remember, but the avid canoer had never experienced anything like this.

The 40-year-old Elsea is approaching the end of what has been a three-month voyage by canoe, traveling the entirety of the Mississippi River. It’s been a dream of his since he was a boy, and he decided it was time to make it a reality.

“It’s kind of a 40th birthday present to myself,” said Elsea, whose travels brought him to Luling last weekend, where he experienced all of the local flavor — both figuratively and literally — at the Alligator Festival.

This “birthday gift” doesn’t benefit Elsea alone, though. He is raising money and awareness for the charitable organization Shelter Box, which provides temporary shelter and life-saving supplies to displaced families and which pre-positions life-saving equipment in places around the world so the group may respond more quickly and effectively after a natural disaster. Elsea has been speaking to rotary clubs in the cities he’s made stops in to forward the cause.

He began his trek approximately 90 days ago at Lake Itasca in Minnesota, where the Mississippi River begins. It flows for a length of 2,348 miles before pouring into the Gulf of Mexico just below New Orleans. 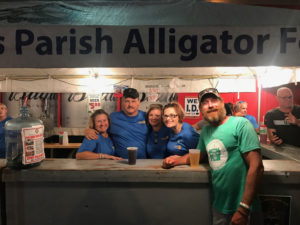 Elsea has travelled just about that distance, some of it rather harrowing. There were a few days he had to push through the remnants of Tropical Storm Gordon. There have been quite a few more bouts with rain and thunderstorms, though Elsea said the wind is the real threat to derail travel.

“(The wind) can make it tricky,” he said. “If it’s just rain, I’m fine canoeing through it. But there were some points I had to pull to the side of the river and ride it out. The longest time was about four hours.”

Traveling such a distance by car seems like an exhausting prospect for many. But even after countless hours of rowing and guiding his canoe along the river, Elsea says he’s not remotely exhausted – and, in fact, seems invigorated.

“I feel pretty darned good, physically,” Elsea said. “I’m a little sad that it’s almost over, because it’s been such a phenomenal experience.”

What’s been the hardest part, for Elsea?

“According to my rear end, it’s probably my seat,” he quipped. “But besides that, I feel great.”

Elsea grew up just outside of St. Louis, where his family kept a canoe in the backyard. Their home was right next to a lake, and he and his family made great use of not only that lake but also took to other waters to experience what those had to offer.

“I feel pretty darned good, physically. “I’m a little sad that it’s almost over, because it’s been such a phenomenal experience.” – Erik Elsea

“There are a lot of rivers in Missouri and we’ve canoed several of them … we did a week in the boundary waters of Minnesota and Canada,” Elsea said. “But I’ve never done anything like this.”

Though he said he hasn’t seen any alligators yet in the waters here — something he said comes as a surprise to most — he indeed got a chance to be eye-to-eye with one when he had the chance to hold a baby gator at the Alligator Festival.

One thing that’s stuck out to him throughout his excursion has been the hospitality shown to him by so many people from town to town, with Luling hardly an exception.

“When people find out what you’re doing, they go out of their way to offer support,” he said. “River angels, they call them … they open their homes, offer their yards to camp in, let you do laundry … there’s been a ton of support.”

When it rains, it floods

Fifty two days ago rain poured and homes flooded all around St. Charles Parish in a deluge that caught many residents by surprise. Today many residents experienced weather deja vu as rain fell and streets and yards became rivers once again. […]

How to navigate hard decisions, the important of honoring commitments and why you shouldn’t give up when something gets hard – these are the life lessons Zephan Cohen said he will take away from his time at Destrehan High School. […]