The bright lights and vivid colors on stage may strike the audience first, but those behind Lightwire Theater say it’s the characters that leave a lasting impression.

“Our stuff looks cool, but like we say all the time, cool will get you about five minutes (of attention),” said Eleanor Carney, who along with husband Ian are owners and directors of Lightwire. “It’s about characters and storytelling. If you don’t fall in love with the characters, you won’t be that into sitting there for an hour looking at some interesting lights. There has to be more.”

The New Orleans based company creates electroluminescent stage shows featuring these colorful characters in the form of neon puppet creatures. On Saturday, Lightwire will arrive in Luling to present The Adventures of Tortoise and Hare: The Next Generation at the Lafon Performing Arts Center in Luling. There will be two performances, the first at 10 a.m. and the second at 1 p.m. 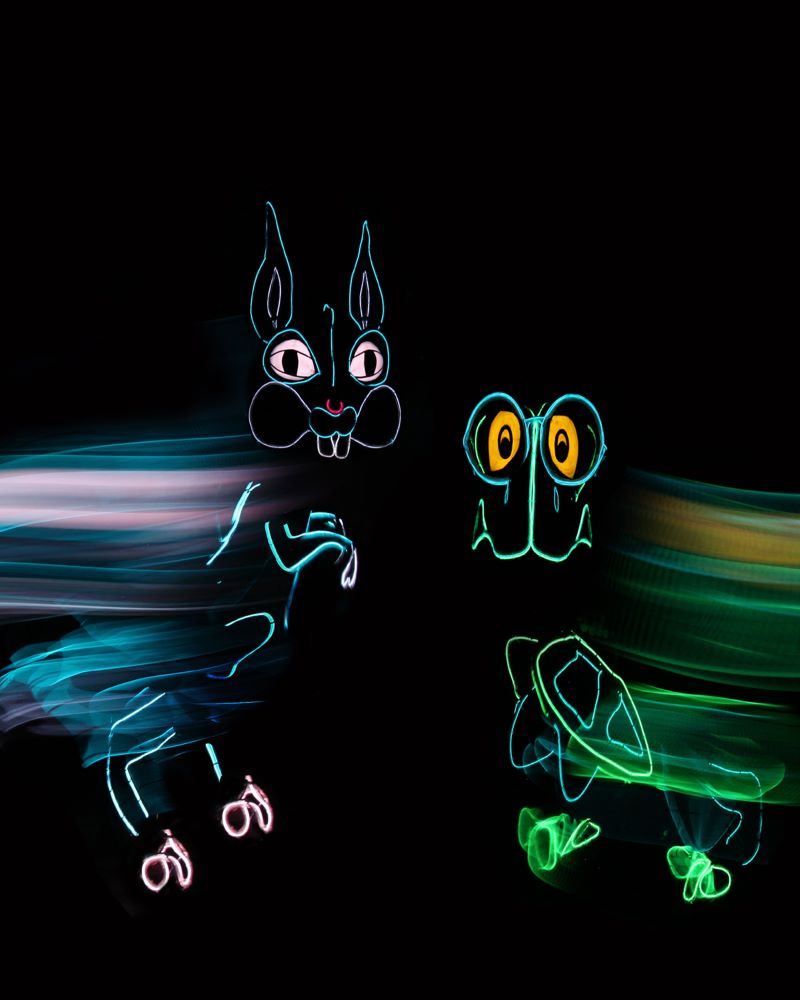 The Adventures of Tortoise and Hare was initially set for the Lafon Center in 2020, but COVID-19 led to its cancellation – or, as it turns out, simply a delay.

Lightwire’s specialty comes through communicating through movements and music rather than through spoken lines, allowing for an experience that can entertain children young and old, along with their parents and grandparents.

Lightwire’s Tortoise and Hare is a different spin on the well-known story of a boastful hare, who mocked the tortoise for being slow, ultimately getting his comeuppance when the latter beats him in a race. Lightwire’s tale is set many years after that race, with the two participants now having children of their own.

“They meet again, and the Hare is still rather unhappy he didn’t win that race,” said Carney. “He sees (the two children facing off) as his opportunity for a rematch.”

Behind each puppet creature is a performer, simultaneously acting the role and telling a story while also operating the character’s lighting.

“A lot of people don’t realize that,” Carney said. “It’s not done through a computer … we’re operating switches, controlling the lighting ourselves, while doing the choreography.”

The performers – including the Carneys – are predominantly trained dancers. She said learning to tell stories through this unique medium indeed has a curve to it, with a lot of self-evaluation on video.

Immersing one’s self into his or her character is vital to the performance, Carney added.

“If you’re not feeling the emotion you’re trying to portray with this character, it doesn’t work,” she said. “When we’re operating the puppets, we think in terms of what we would do ourselves if we were put in this character’s situation. If you were to watch any of us during a performance, if the turtle’s head goes down, the performer’s head goes down. You put your movement and emotions into the creature.”

It can be challenging, but also extremely rewarding, she said.

“We just finished two in Arizona today,” Carney said. “There were about 1,100 kids there and it was a lot of fun … it’s just such a fulfilling way to tell stories and perform … we really pride ourselves on making shows that both a 5 and a 50-year-old will be laughing at different things. There’s something for every age.”

The story takes the audience through two time periods, that of the initial race and then for the children’s “rematch.” The music and the Hare’s distractions during the first race reflect a time period long ago. Fast forward and – just hypothetically, of course – were Hare Jr. to be distracted along his way during the later race, the distractions he would reflect today’s landscape, with the music reflective of modern day as well.

Although the 2020 performance was cancelled, this isn’t Lightwire’s first venture to the Lafon Center. In 2019, the venue played host to “A Very Electric Christmas.”

Carney, a New Orleans native, is excited to be back.

“It’s so close to home in New Orleans … we’re just very excited to perform in Luling,” she said. “(Lafon) is such a beautiful facility. We were supposed to premiere the show back in 2020, so this is definitely a long time coming.”

St. Charles Parish is renowned for being a prime venue for those who love nature and the outdoors in general. On Saturday, the second annual Fish Dat Rodeo takes aim at encouraging parish residents, particularly […]