When Chuck Falgout and his family play Trivial Pursuit, he’s the guy who knows the answer to who was Russia’s world champion pole vaulter.

It was Sergei Bubka, Falgout enthusiastically blurts out before they finish asking the question.

And, of course, he’s right.

“I love being a student,” he said. “And I’m blessed or cursed with an amazing memory. I’m a trivia junkie. I remember obscure things. The running joke in the family is when we play Trivial Pursuit, it’s everybody against me.”

Behind most great purveyors of knowledge is a good book, and Falgout has nearly 700 of them at his home in Bayou Gauche. He’s a small collector and bookseller of rare, used and out-of-print books. It’s his hobby and his passion, with many of them about his favorite topics like Louisiana and Cajun history, the military and classic literature books.

“I like being the go-to guy if people have questions,” he said. “I just remember things like names, dates, places and characters from books. One day my head will fill up and my daughter’s name will just fall out the other end.”

So far, his head still has room for new information.

This Cajun can consume a 500-page book in a couple of days. When he traveled with the military, he also listened to audio books, averaging three to four of them a week. Falgout works at Bayer now so he relies on his own library for books, which is extensive.

He’s been collecting books nearly 30 years since his teens. Later, he grew his collection by buying books at estate sales and many of them are special. 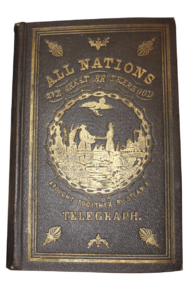 His small online book business began after talking to a bookseller in Lafayette, who suggested the move. He also trades books to get other books with a couple of bookstores.

“I started the business and I posted six or eight books to try it out,” Falgout said. “Three months later, I sold one and a month or two later I sold another one.”

So, his passion is still mostly a hobby.

His cherished books include the old math book, as well as one on his family history and some of the autographed books like the first edition of “Flags of Our Fathers” with signatures from Medal of Honor recipients who served in the Battle of Iwo Jima, one of the epic campaigns of World War II.

One of his books, “Merrill’s Mirauders,” about a legendary special forces unit that went behind enemy lines in Burma, also in World War II, is important to Falgout and one he considers one of his special finds. It has the signatures of the last six remaining members of the unit.

“The Fighting Men of Louisiana” written in 1947 is his most valuable book monetarily, which was sold by subscription door-to-door between Monroe and Shreveport. One of his estate sales finds, Falgout said there may have been as few as 500 copies or less printed. Many of his first editions and first printed editions are valuable, too.

“With me being a perpetual student, I love learning,” Falgout said. “I haven’t read every book on my shelf and, hopefully, one day I can, but having them is like learning from osmosis. I kind of know what’s in the book even though I haven’t read it. I have direct knowledge that I don’t have to Google. I’d rather find the information for myself. It’s like having my own personal library.”

Hahnville is headed to the big dance.

The Tigers officially qualified for the Top 28 boys basketball championship tournament after upsetting No. 2 seed Ouachita Parish on Saturday night to advance to the state semifinals, 70-67. […]

Today, the St. Charles Parish Emergency Operation Center received confirmation from the Louisiana Department of Health that a second St. Charles Parish resident tested presumptively positive for COVID-19, also known as coronavirus, and is also being treated in Jefferson Parish. […]