At 2-1/2 years old, Rory Frickey uttering the word “butterfly” brought his mother and speech therapist to tears. It was the first word he’d spoken since birth, representing a major breakthrough for his mother, Erin, who realized her autistic child could have a normal life.

“It took us a few seconds to realize he actually said the word,” said the Luling mother. “He should have had at least 20 words by this time and had not even said ‘Momma’ at this point. It was amazing and for him to say such a complex word … we were so happy.”

And it got better.

Until then, it was a very different outlook for her, who worried about her son, now 3, since his diagnosis a year ago.

“I was heartbroken, of course,” Erin said. “Our therapist prepared us for that. There is a mourning period that all parents go through. My husband and I just looked at each other and said this was the same exact child that we love and he’s going to be okay.”

Rory represents a substantial increase in children with signs or diagnosed with autism in St. Charles Parish, as well as in the U.S., according to Sandra O’ Brien with Early Steps. The intervention program is for children up to three years old with at least two developmental delays. She also offers Caring Strategies as a resource to parents on child development, a newly opened center in Destrehan.

In O’Brien’s 15 years working with this age group, she’s observed the number of them with signs of autism “exploding” from 1 in every 10,000 children to 1 in every 60 children on average. The number is even higher for boys, further raising questions about genetics.

“That makes you wonder … and that’s all over,” O’Brien said. “I’ve been through the generation where we saw none and now so many.”

Among the children she works with in the program at least half of them are “in the spectrum” exhibiting signs of autism. They can emerge at an early age, which why it’s important and a welcome opportunity to intervene early.

Autism or autism spectrum disorder (ASD) refers to a broad range of conditions characterized by challenges with social skills, repetitive behaviors, speech and nonverbal communication. A combination of genetic and environmental factors influence the development of autism, which is often accompanied by medical issues such as gastrointestinal (GI) disorders; seizures and sleep disturbances.

O’Brien added an increasing number of parents are associating the disorder with inoculations and food, which makes it a confusing time for them with autistic children. Additionally, one child may have the disorder while siblings may not, and she said it has even appeared among twins where one had it and the other not.

Based on what she’d heard about autism, Frickey conceded to having fears about having boys because they at higher risk of having the syndrome. Despite her fears, her oldest son did not have it, but Rory fulfilled those fears and it was a difficult diagnosis, particularly after the couple’s difficulties with having children.

Rory exhibited the typical signs of the disorder with not speaking, playing by just throwing toys around the room rather than with a purpose, and no interaction with other children or adults, according to his mother. When he still wasn’t speaking at 22 months old, a friend advised her to consult a doctor, which she did immediately and the disorder was confirmed.

“Who wants to realize there’s something wrong with their child,” Frickey said. “He would not play or even acknowledge other children’s presence.”

She went to the Web for answers and instead found a skyrocketing number of children were being identified with the disorder. But Frickey also found increasing efforts to identify them and also provide early intervention, and that meant the world to her. With this realization also came the one that these children are getting needed help that can get them in a typical classroom, as well as on a track to college and having their own families.

“There is a mourning period that all parents go through. My husband and I just looked at each other and said this was the same exact child that we love and he’s going to be okay.” – Erin Frickey

“He’s so smart and quick,” she said of her son. “He doesn’t forget a thing. He’s phenomenal.”

Angie Brian recounted the same for her three-year-old son, who she declined to name, but emphasized he’s an avid reader and is “obsessed with animals and birds.” He was diagnosed in October of last year with high functioning level 1 autism after his symptoms manifested at age 1 with delays identified in speech, and sensory issues (prefers crunchy food and will not eat vegetables).

“He would do things differently like walk in circles, have sensory issues with food, textures and sound,” said the Destrehan mother of her child. “He would repeat stuff – a lot. Even though he told you something and acknowledged it, he had to tell it to you again and again and again.”

But both mothers say they reached an understanding that helped them move forward to help their child.

“You deal with it,” Frickey said. “You move on. You do the best for your child and get what he or she needs. You live the best life you can.”

For Brian, her son, Gunnar, is like any child, too.

“He’s awesome,” she said. “He’s very smart. He likes to read and do things any other kids like to do. I think I probably handle tantrums differently. Most of the time, he has tantrums when he’s just hungry or tired, but I feel that’s normal for any kid.”

Brian said, despite her son’s delays, he excels in other areas. Gunnar’s evaluation shows him in speech at a near seven-year-old level, Brian said. 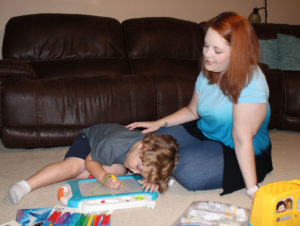 They also both emphasize the importance of early intervention with programs like Early Steps.

“I feel like some people wait too long to get their kid tested,” Brian said. “Early intervention, I think, is the best way to help them push through their delays. My thing is, if you notice your kid not talking enough or not moving around enough or not chewing their food enough, have them tested.”

Early Steps works with children until age three with developmental delays, and then at age three to four, its ABA therapy and/or going to school, she said. In the interim, Brian has also sought programs for her child and, when she had difficulty finding them for disabled children, started her own Facebook group page – Advocating for Our Exceptional Kids (River Parishes Area) about three months ago. It has nearly 200 members on it, including people like O’Brien who advise parents.

Frickey also has advised other moms remember this is still their baby.

“They just need a little help,” she said. “Do the work. Do everything the therapists tell you to do. Everything will be okay. Will your child be perfect in the world? Maybe not, but that’s okay. Always pray and never stop praying because God does answer prayers, and I’ve seen it in my own life. I prayed and prayed for eight long years to have my babies and he answered me.”

She added, “I know he’s going to be okay. He’s going to go to college, have a career and have a family one day, and he’s going to be great. I have absolutely no fears for his future, and I know it’s because we got a handle on it early.”

Hahnville celebrated as the clock struck zero in its 69-56 victory over visiting Destrehan Tuesday night, enjoying a victory well-earned over its archrival – and a storm weathered.   […]

Dr. Vadakkipalayam Devarajan, affectionately known as Dr. Raj to his patients and colleagues, hung up his white coat this month after serving the St. Charles Parish community for over four decades. […]

U.S. Senator Bill Cassidy announced this month that the Federal Emergency Management Agency will grant the state of Louisiana. […]