For a few moments, Abigail Hall Estevez got to step back into a world that meant so, so much to her growing up.

“This meant so much to me, forever … this was my life,” Estevez said, moments after throwing out the ceremonial first pitch at Destrehan’s Friday softball matchup against South Lafourche. “For them to do this, it is really, really special.”

Estevez, a former Wildcats’ pitcher, was not just referring to the chance to re-take the mound, however. Destrehan’s softball program stepped forward to help Estevez and her husband Blake, as the two care for their infant daughter Blakely, who was diagnosed with kidney cancer in January.

Destrehan presented Estevez with a check for $2,600, the result of a pastalaya fundraiser the softball team’s coaches and players dedicated to the family. 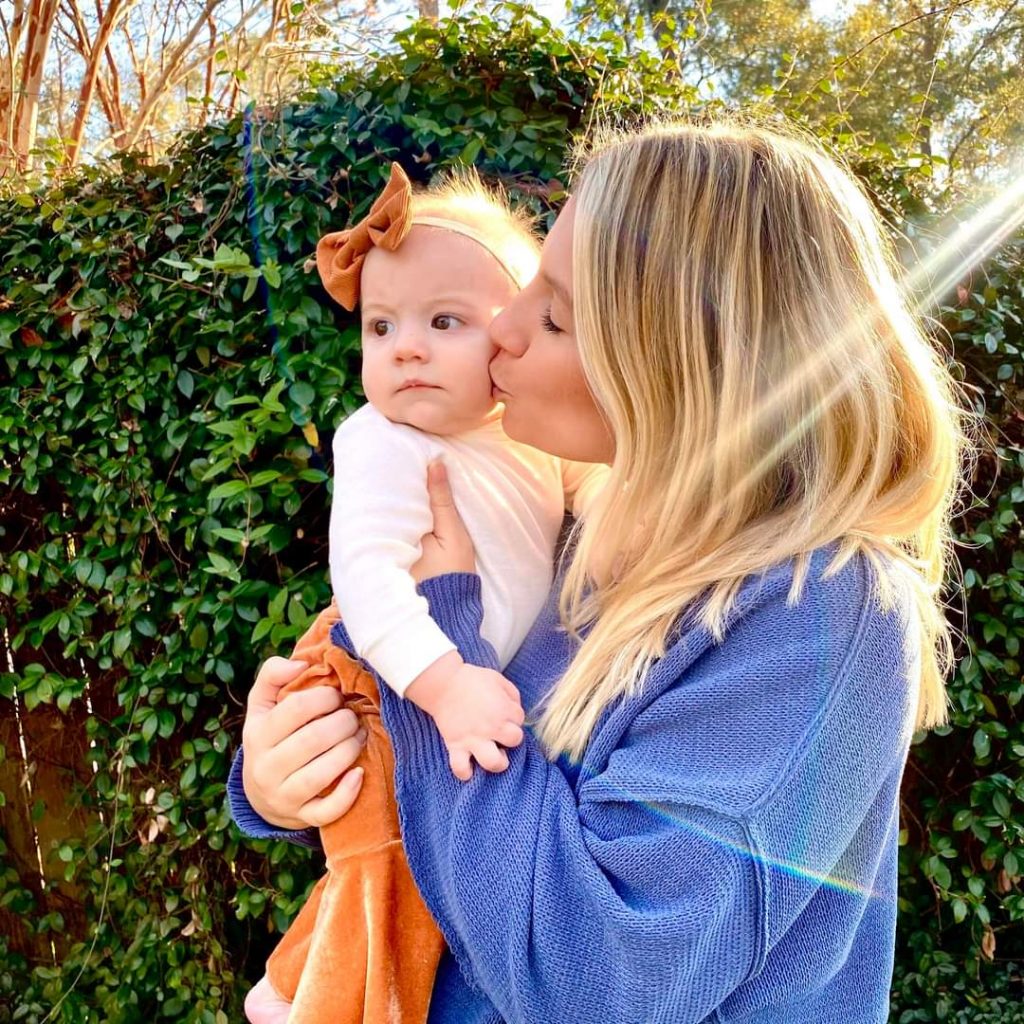 “We have this big, life-changing moment, and they were right there to support us,” Estevez said.

Estevez was also wearing a shirt presented to her by the team – it read, “Bee Strong,” a call to Blakely’s nickname of Bee. Estevez was not alone in wearing the shirt, as the Wildcats took the field in them, customizing their jerseys for the occasion.

She wasn’t alone while taking the mound either – Bee was right there alongside her, watching her mother throw the pitch.

Estevez was a standout pitcher for Destrehan, a three-year starter who went on to play college softball at Southwest Mississippi and Baton Rouge Community College. She is an alum of the DHS Class of 2013.

Was she satisfied with her pitch?

She was quite happy with the chance to do it, though.

“It had been awhile … I loved it,” she said. “I wish I could do it again … I had no idea they were doing everything with the shirts, I thought I was just coming to throw. It’s really special to see how much thought and effort they put into it.”

Destrehan head softball coach Kenneth Montz said once everyone became aware of Bee’s situation, it was unanimous – the team’s upcoming fundraiser, which annually coincides with a tournament Destrehan hosts, would be directed for a different purpose.

“My daughter had the idea … we’re sitting around the dinner table and she tells me, ‘Dad, we’ve got to do a fundraiser, something to help them,’” said Montz, who coached Estevez. “We wanted to do our own little part to help out. The girls bought into it from the moment we talked to them about it. They were all in.”

On Jan. 27, Estevez brought Blakely to the pediatrician for a checkup. While there, Estevez asked the doctor about a lump she felt in her daughter’s belly, and an ultrasound was scheduled.

Blakely was sent to Children’s Hospital to get blood work and a CT scan. After the tests were complete, it was determined that she had a tumor on her left kidney and a small lesion on her right kidney. Doctors decided to start with six weeks of chemotherapy to shrink the mass on Blakely’s left kidney before removing it and to hopefully eliminate the lesion on her right kidney before it progresses.

Compounding the issue is that the news came at a time the Norco family is in a lapse of health insurance. Estevez was scheduled to go back to full-time employment as a pediatric occupational therapy assistant earlier this year. She went down to part-time after Hurricane Ida because Blakely’s sitter’s house was destroyed. Estevez was set to carry Blakely on her insurance, since Blake is a fireman who recently switched jobs and is currently in the 60-day window in which he doesn’t have health insurance. On top of it all, like so many others, the family suffered major home damage due to Ida.

News of Blakely’s diagnosis spread fast around Facebook and within the St. Charles Parish community. Over $80,000 has been gathered through a GoFundMe for the family, and numerous fundraisers and raffles have also taken place. Destrehan Nutrition announced on its’ Facebook page that it would be collecting donations for the family, and a meal train has also been established to help with feeding the family.