The film begins with a looming, ghostly image of Howdy Doody holding a bloody message saying, “Hello,” that unleashes the horror intended by its director Jo Leggett on an unsuspecting audience.

“I actually collaborated with a team member who suggested that we do something not super cheesy, but realistic,” Leggett said. “You show up to work and no one’s there, and you’re wondering why. I think I just liked the point of view of having one person, and I wanted something short and sweet.”

When she looks at where the puppet was, it’s gone. 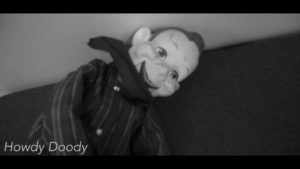 “I decide to see what’s going on,” she said. “When I check on things, I see one of my co-workers is on the ground. Then, in another room, I see another co-worker on the ground, and I decide to hide.”

This is Leggett’s dream in motion.

“I want to be a director one day,” she said. “That’s my ultimate dream.”

Her short film aired on the parish’s public access channel, and can also be viewed online.

But in the advanced TV broadcasting/headlines and news (ATVB) class at the Satellite Center, Leggett is advancing the work of the first Howdy Doody horror film called “American Stalker” in 2007-08, said Hunter Robinson, ATVB facilitator. Robinson, a former student of the class himself, made a sequel to it and more followed. Leggett’s short film is called, “Howdy Doody Strikes Again.”

“He’s kind of been here from the beginning with the original teacher [Albert Dupont] with the class who brought him,” Robinson said. “He’s kind of the class mascot and appears in videos all the time.”

Leggett didn’t initially know about Howdy Doody as a revered piece of Americana from a children’s television program that first aired in the 1940s. But she did know about the puppet’s notoriety as a horror carryover and that the doll was available in her television production class.

“Every year, every class has done a Howdy Doody video as a sort of tradition,” she said. “When I learned no one had done one so far this year, I did one. I’m really into really scary short films.”

Video production is what this class is about in everything from news reports to documentaries to short films for Robinson’s students.

“I think what we do here is unique in my group,” Robinson said. “If they want news, they cover real news events.”

His students covered the opening of the Bonnet Carre’ Spillway and interviewed spectators, he said. Their reports aired on the public channel. They also make commercials, expanding student reach to the public.

Robinson said students recently made commercials for Arc of St. Charles, which are airing on the parish’s public access channel – Cox Channel 8.

“I think it’s the most beneficial way to give them real world experience,” Robinson said. “We’re giving them the gambit of opportunities.”

Six qualify automatically, two districts to be decided in School Board election

With the final day of qualifying for this fall’s St. Charles Parish School Board election ballot passing last Saturday, two new members were cemented as they and four returning board members will run unopposed, while two districts will be contested. […]

🙏 Jaleesa Chapman said she is excited to see what God will do in her beloved community of St. Charles Parish. […]