There were a few surprises in his military career

Frank Sims Jr.’s relationship with his father had been strained even onto his death in 2011, but now he wanted his 4-year-old grandson to know about him.

Sims’ decision to assemble his father’s U.S. Army memorabilia into a collection for a shadow box also turned into a journey about learning about the man he considered challenging to know.

“As a service man, he was pretty strict,” Sims said. “He was gone a lot of the time due to his career.”

After serving 27 years in the Army, he went on to work at the Anniston Army Depot and retired there.

They had become so estranged that the two were both serving a tour of duty in Vietnam and didn’t know the other was there, too. That is until Sims, who also served in the Army at the time, got a letter from the Army stating his father, Frank Sims Sr., was being sent back to the United States because the two of them couldn’t be there at the same time.

The Sullivan Act prevents family members from serving in a combat zone together. In World War II, the act came about when four of five brothers serving on the same ship were killed when it was sunk in battle.

“He didn’t talk about it,” he said. “We pretty much were separated and I didn’t get to know him well until I was grown.”

Now, these many years later after his father’s death, Sims’ 4-year-old grandson, Ian Sims Felton, got him wondering about finding a way to show him about his grandfather. 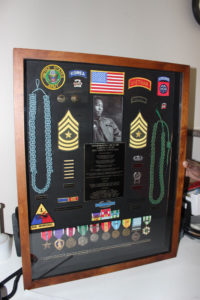 mething about him,” Sims said.

What he found was shocking.

From the memorabilia and background emerged a man that Sims never knew. While Sims was not close to his father, he learned things about him that broadened his understanding of the man.

In a row on the bottom of the box now rests a Purple Heart, Bronze Star, six Army Good Conduct medals, a National Defense Service Medal with bronze service star, a Presidential Unit Citation, and three Korean Service Medals with two bronze and one silver star. 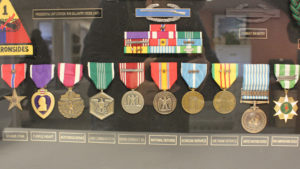 Sims confirmed his father’s receipt of them and then got the medals from the Army Awards Center.

His father’s military history is showcased in a shadowbox made by fellow veteran Michelle Bowers.

“I would say militarywise, he was a hell of a man,” he said. “It meant something, but I didn’t realize it until I had all that put together.”