Xavier Johnson’s eyes lit up as did his smile as he darted across the classroom to embrace a very special, unexpected visitor.

For the first time in three years, Xavier and his father were together again.

Avery Johnson left home for military deployment in July of 2018, and hadn’t been back since. The three-year time period of being away wasn’t expected – or, at least for it to go uninterrupted. COVID-19 policies and quarantining put Avery in a position where he was unable to return, even briefly.

But he and Xavier were finally able to see each other, part of a birthday surprise planned by Xavier’s parents and Harry Hurst Middle School – Xavier turned 13 on Thursday. Hurst Principal David Schexnaydre popped into the former’s science class to offer happy birthday wishes.

He told Xavier there was a special surprise for him, and was there ever. Some tears flowed from classmates and teachers during an emotional moment, but there was nothing but joy from father and son.

“My emotions are all over the place,” said Avery, minutes before surprising Xavier. “I can’t pinpoint one … it’s happiness, anxiousness, an overwhelming feeling of joy and pride. I’ve been away so long, but hearing about how he’s come up, how much people love him and say what a great kid he is … I’m such a proud dad to know he’s doing what he has to do while I’m away … mostly, it’s a lot of excitement.” 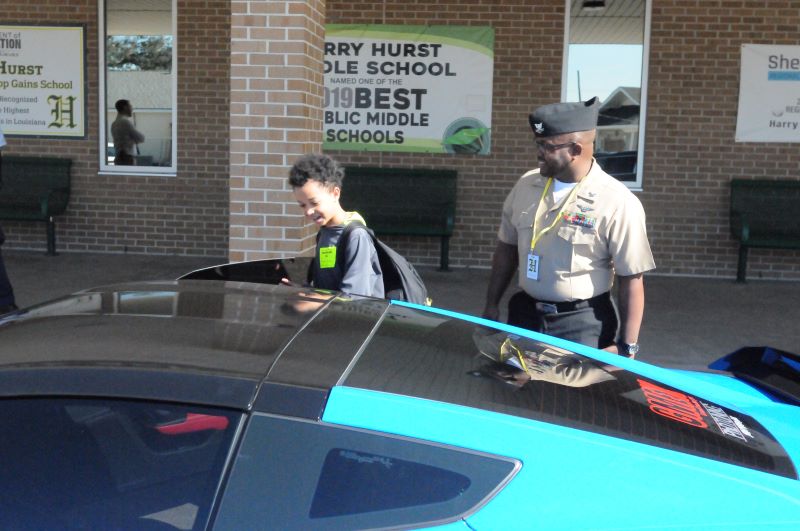 “(Being away from him) has been one of the hardest things ever,” he said. “I made that decision to serve the country, and also to be a father … ever since I left, it’s been a non-stop sacrifice. Nothing about it is easy.”

Avery said the return home was made possible now that some COVID military policies have changed, and the first chance he had to take the opportunity, he did. He was first deployed in July of 2018. In 2020, he was quarantined in Guam for five months due to the coronavirus outbreak upon the U.S.S. Theodore Roosevelt aircraft carrier. Later, with Louisiana at different times being considered a COVID hot spot, he was denied permission to visit family back home.

“Then there was another deployment for eight months,” Avery said. “But it’s all worth it to see him today.”

But this was just part one of Xavier’s birthday surprise. Part two awaited outside.

In addition to his father, Xavier also loves cars – and he’s got good taste.

“The fiancé of a co-worker of mine has a Corvette and let us borrow it,” said Lacie Carmouche, Xavier’s mother. “(Avery) is going to take him home in it … Xavier loves all the exotic, expensive cars. So, it’s really icing on the cake for him.”

Gavin Blakley and Maci Bourgeois lent the Corvette for the occasion, and it indeed hit the mark. Xavier saw the car and was on Cloud 9 for a second time.

While the car was a highlight, though, the reuniting of a father and son was the day’s main event.

“(Xavier) doesn’t really express openly if it bothers him, but I know he wishes his dad were here,” Carmouche said. “The good thing now is we have things like Face Time when he’s away … it’s not the same, but it’s good to have. When they talk on that, he’ll usually go off into his room and talk, just him and his dad … it makes it special to be able to see them together.”

Schexnaydre said Carmouche reached out before Hurricane Ida to set up the Corvette surprise, and the idea was expanded upon from there.

“They wanted to surprise Xavier at the end of the school day and I told her, hey, this is Harry Hurst, we’re extra about everything,” said Schexnaydre with a smile. “So, let’s take this up a notch and go surprise him in class. She was all on board.”

Once Ida hit, the original date planned on was postponed, but that enabled the idea to blossom into a birthday surprise.

“It was hard for me to keep it a secret,” Schexnaydre said. “I couldn’t tell anyone. When you get a chance to do something like this, you’ve got to make sure everything’s perfect … he’ll remember this day for the rest of his life, and I’m just glad we were able to play a small, small part in it.”