As society debates the issues surrounding the major events of 2020, it can sometimes be easy to forget that adversity often brings community members together, as opposed to sewing division.

Such an instance came earlier this year, as many River Parish residents made the effort to “Adopt a Senior” of the Class of 2020.

The school year abruptly ended due to COVID-19, and with it the high school experience for so many seniors who would never have a prom, a real last day of school, a senior trip or a chance to say goodbye to their classmates or the teachers who inspired them to excel.

That inspired a trend nationwide aimed at letting seniors know their loss wasn’t taken for granted and that their voices were heard. The River Region was no different, as several Facebook pages created by local residents brought together people for the cause, which saw members send gifts and words of encouragement to more than 1,000 seniors. The page, titled Adopt a 2020 Senior – River Parishes Edition, was created by Destiney Guillon, a St. Charles Parish teacher.

For Destrehan High School graduate Destinee Mikell and mother Yolanda Dent, their experiences represented each end of the cause, with Mikell receiving a welcome morale boost and Dent spreading the same to 11 adopted senior students.

“(The end of the school year) was so unexpected and sudden, and it brought me down,” Mikell admitted. “I wasn’t able to go to school and be around the people I loved. I was expecting to have all those things you wait for to end your senior year, and then this happens.

“Seeing people … some of them I knew and others I didn’t even know, reach out and show they cared was such a blessing.”

Some of her gifts represented things that will come in handy once she moves on to college, where she’ll be living in a dormitory. Some gifts were monetary, which likewise represented a big boost.

“It really made me feel good,” Mikell said. “Some people sent snacks, and pictures to put into my dorm room. It all really helps.” 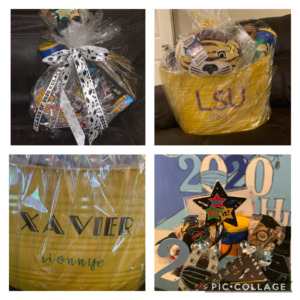 She added that things like “drive by” parade celebrations for graduation and other events showed the good hearts of so many community members.

Dent said she was invited to join the group and immediately took to the cause. Among her adoptees were several students at DHS, while a few others were in the New Orleans area, children of her co-workers.

“Once I saw what was going on, I really wanted to adopt a senior and help out,” Dent said. “It was just a blessing.”

Dent filled gift baskets for her students, filled with useful items like her daughter received. She also incorporated some paintings that she and friends had made during quarantine.

“My little cousin graduated from Destrehan, and I was there when she opened her basket. Tears just ran down her face,” Dent said. “It filled my heart with joy to see that appreciation. It was a gift of love and that’s really what it’s all about.”

Dent said that beyond the reality that many traditional senior activities would be cancelled out of necessity, other activities for both upper and underclassmen alike fell by the wayside. Band concerts, competitions, athletic events and stage performances were shut down. For Mikell, who was a member of Destrehan’s talented theatre program, a lead role in a stage performance she was greatly looking forward to was shut down.

That was tough on mom, too.

“I was so looking forward to seeing her on the big stage,” Dent said. “It just made me want to go above and beyond.”

Dent offered words of encouragement to her seniors. Above all, she wanted them to know brighter days are ahead.

“I wanted my daughter to know her future is bright. I wanted them all to know that,” Dent said. “No matter how dark it is now … the kids of this time will go places. You see how creative so many of them have been during quarantine. They’re going to embark on a new path in life and this only makes them stronger.”

A chance meeting a couple of years ago was the catalyst for a youth Life Skills program being developed in St. Charles Parish. […]

It is a tradition of the St. Charles Parish Public Schools System to annually host ArtsFest – a weekend set aside to showcase talent from the district’s theatre, band and choir groups, as well as visual art presentations and dance performances from the district’s schools and learning centers. […]