In late June, animal control officers received a call about an abandoned dog seen in the bathroom of Destrehan’s splash park. When they arrived, they found there was much more to this canine’s story.

The dog – named Ladybird – was found laying on the ground of the hot bathroom, and at first it appeared she had puppies. It turned out she was just a bit overweight and bloated after eating some fried chicken left for her. Beside her was a note that said the following: “Be nice 2 dog – got stuck no car – be back soon – give my dog some water – be back in morning,” along with a water bottle.

Later that night, deputies who responded to the call found Ladybird’s owner, who had written the note, riding his bicycle back to the park and to his 9-year-old pet, who had been brought to the St. Charles Parish Animal Shelter to be safe from harm and heat.

“He called us and said he still wants Ladybird, but just needs a few weeks to get back on his feet,” said Dr. Jena Troxler, veterinarian and animal shelter supervisor. “Ladybird and his owner are homeless, and he has been living in (a shelter) trying to save his money so he and Ladybird can drive back to North Carolina where he has family willing to help him get back on his feet.” 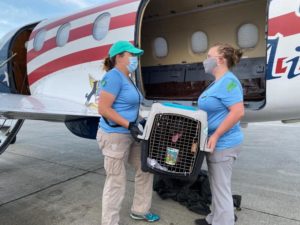 Ladybird and her owner have been together since she was just six weeks old. They’ve spent years wandering and traveling the country together, but when times got tough, they’d return home to North Carolina. It just wasn’t yet possible, but her owner asked for help.

The story touched members of the shelter staff, and they quickly got to hurt to lend a helping hand. Staff reached out to the non-profit agency TRIP, or Turning Rescues into Pets. That organization raised funds to purchase Ladybird a kennel, orthopedic bed, kennel mat and additional medical considerations that she needed to return to full health.

Meanwhile, the Greater Good organization took its own step to help, supplying Ladybird with a year’s supply of Heartgard heartworm prevention and food.

Ladybird’s owner made contact with us once a week to stay informed on Ladybird’s progress.

“You can truly tell how much Ladybird means to him and we are happy to be a part of keeping her safe until they can be together again,” Troxler said. “She has definitely been a staff favorite here at the shelter. Ladybird’s had quite the adventure recently.”

Once she was nursed back to health, her story took a happy turn. Ladybird was flown to the Virginia Beach SPCA in July where a sister shelter drove her to her “relatives” before her owner would return home by bus to reunite with his beloved pet. She traveled on the Wings of Rescue flight that took off in July, which made room for one more to accommodate her. 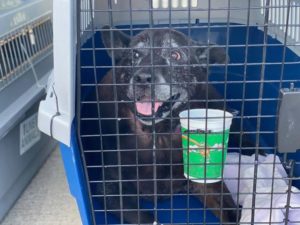 TRIP sent the same gifts to strengthen her care in North Carolina, while also paying for Ladybird’s bloodwork.

“She didn’t lose an ounce of her 89 pounds in our care, (but) we found the cause. She’ll be on meds and will get fit now,” Troxler said.

Ladybird will now be able to live out her elder years surrounded by her loving family.

For 23 years, Sheila Vicknair has picked up and dropped off the students of St. Charles Parish Public Schools. And while her title may be bus operator, she has become so much more to the students who rely on her. […]

St. Rose Elementary Principal Shonda Honor-Harris paused for a moment as she considered the question of what she hopes each of her students remembers, years from now, about their time at the school. […]

by Majoria's Supermarket - 6 days ago

by Gulf Engine & Equipment - 4 weeks ago

by Gulf Engine & Equipment - 4 weeks ago