When Madison Jacob’s name came up for top performance in the 13 and under category at the 4-H/FFA state horse show, she was shocked.

“She thought they’d call her friend Baily’s name because she was doing it so long when they said, ‘St. Charles Parish,’” said her mother, Gaynell Jacob, of Luling. “But it was her name that came instead and she replied with big eyes, ‘I think I’m dreaming.’”

It was her first 4-H competition, which was impressive for a 10-year-old equestrian, but her love for horses – and them of her – may have driven her win. Madison also competed in the 4-H regional competition July 31 – Aug. 4 in Perry, Ga.

She got fifth in western riding.

Madison was surprised, happy and excited about the accomplishment at both competitions.

“It was my first year and I didn’t know I was going to do that good,” she said of the 4-H competition.

Neither did her mother, who was just as delightfully surprised over her daughter’s achievement.

Madison’s horse was Kitty (full name is Impulsive Miss Kitty) who is experienced in quarter horse competitions and, judging by the spark in her eyes, knows what’s she’s got at Rock n’ Ranch in Des Allemands. She also has a trainer, Steve Naquin, and friends Baily Sevin, Callie Naquin and Chaislyn Blanchard who also advise her.

“Everything she eats, dreams … everything is horses,” Gaynell said.

Madison’s brother, Dylan, helped inspire his sister’s love for horses when he started helping out at Rock n’ Ranch where their five horses stay. It’s what got Madison there, where she started working with a rescue horse named Fancy who became the first horse she rode on.

Although Gaynell is uncertain about where the love for horses came in her family, she does know her father-in-law did rodeos when he was younger and they had race horses, too. So it apparently comes from Dawson Jacob Sr., her husband’s side of the family.

At a young age, Madison expressed a growing and deep desire to have a pony.

“She asked Santa for one since three to four years old, but it was My Little Pony or a Barbie pony,” Gaynell said. “Then came Frosty two years ago.”

Frosty was the real deal and a big deal.

“It was my first year and I didn’t know I was going to do that good.” — Madison Jacob

At one point, Madison announced she didn’t need a boyfriend because she has a pony named Frosty, her mother added.

“The pony lets her do anything,” she said. “There’s a bond. A lot of people tried to ride this pony, but Madison made him a nice pony despite his reputation.”

He is a small horse or cob, which is larger than what most people know as a pony. They are small and compact, typically with somewhat short legs.

This cob is a white and brown gelding, and the love of Madison’s life.

“I think that he likes me because he probably knows I love animals,” she said. “I felt that once I got on him. He didn’t buck or anything, and I kind of felt that I knew him a lot.” 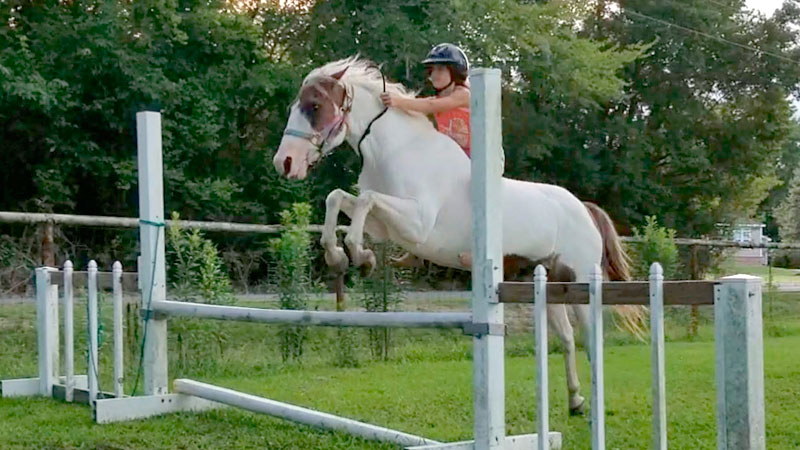 Formerly named Rascal, Frosty is 17 years old and has often been a rascal, Madison said.

“He puts up his lip and shows me his teeth,” she said. “He’s smiling.”

And there are, however, times when he’s a bad rascal.

In a building seating 70,000 strong, Ella Grace Francis commanded the attention of all. […]