It was summer vacation with a twist for the Graffagninis as they loaded on their 45-foot “BMX bus” for a whirlwind tour of the U.S.

“We made the whole loop,” said Luling native Anne Graffagnini of her family including her husband and three boys. “We went on the BMX tour of the Southwest. All three sons love it and are very talented in it.”

That would be Miles, 7, Matthew, 9, and Mark Jr., 10, putting the pedal to the metal in racing for a vacation that couldn’t be sweeter with catching the sights and some of the best tracks in the U.S.

“You really do have to travel to be competitive once you get involved with it,” she said. “This is really crazy, but my husband bought a 45-foot ‘BMX bus,’ which is a regular motor coach RV.”

Their regular track is in Gretna, and they prefer racing to doing tricks. Graffagnini said her boys race BMX with the difference being “If you’re going up, you’re not going forward. So their goal is to get to the finish line.” 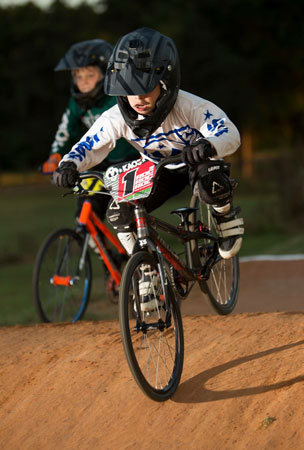 The trick is moving over obstacles to move them forward.

“It’s very different than the other sports their friends are in like baseball or basketball where playgrounds are abundantly available,” she said. There are only four competitive BMX tracks in Louisiana so they hit the road on a 20-day vacation.

Their trip included a weeklong BMX camp in San Diego, Calif., and at Chula Vista, Calif., for the USA BMX Olympic Training facility.

“The middle son” – Matthew – mapped their route, which included a BMX track every day.

Their stops included Shreveport to Forth Worth, Texas, and then next day to New Mexico to Duke City BMX, and Fort Worth, Albuquerque, N.M., and Moab BMX Park in Utah.

“Once we got to Utah, it was pretty much we were tourists with all the national parks,” Graffagnini said. “So we did stuff. My husband and I got the touristy things in San Diego while they were in camp.”

Broc Raiford, also of Luling and world-renowned competitor in BMX trick riding, has served as an inspiration to these boys. They watched Raiford on YouTube and loved his tricks, but worried about the injuries and chose to take the racing route.

“We kind of steered them to the track,” Graffagnini said.

The move didn’t take much convincing after Raiford’s friend, Scotty Cranmer, seriously injured himself riding. “They watched him getting hurt and then showed his recovery. That scared my boys and they said, ‘Oh, let’s go race.’”

The trips home from races can be difficult with three in the sport, particularly if a younger brother beats an older brother. Overall, they remain supportive of each other.

Graffagnini said the bottom line became “We race from Point A to Point B.”

She praised the Olympic facility in Chula Vista, Calif., with two tracks that are replicas from past Olympics. In national competitions, tracks are designed differently so competitors get 30 minutes to prepare before the actual race.

A national competition is coming up, called the Gold Cup Final, in September.

“It’s a big race and we all have an advantage because we know the track whereas the competitors will have the 30 minutes to learn, but most of the time we’re outsiders,” she said.

Yes, the track is in Gretna, which is run by volunteers including their father.

And BMX is an absolute fit for the sons of two competitive cyclists.

“Everybody laughs,” Graffagnini said. “Through my pregnancies I was a spin bike instructor. My friends say it’s fitting. My sons took to cycling, too, so BMX is a natural fit.”

She and her husband-to-be, Mark, met as spinning instructors. They spent their honeymoon on the Le Tour de France, the famed bicycle race held in France.

The single he released earlier this month is one of the most personal songs he’s ever written, Jim Lockwood said. “Diane” pays tribute to Diane Beard, a Destrehan High School classmate who was murdered a […]