Destrehan’s DeAnn Sullivan always wanted to learn how to make a classical tutu – from scratch – so she went to tutu school and it’s turned out to represent so much more than she anticipated.

The school is taught by retired ballerina Claudia Folts from Tutu.com. Folts travels throughout the U.S. to teach people how to make professional tutus along with other costumes used by dancers. For the past two years, Sullivan has attended Folts’ seminars at Texas Christian University in Fort Worth, Texas, and her website has the materials, as well as the instruction, on making, buying or renting a tutu.

“By going to tutu school, I’ve met so many different people who do different aspects of the job,” said Sullivan, who is a seamstress. “I can sew just about anything, but I prefer costumes and particularly those people dance in.” 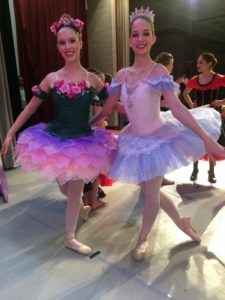 While attending the seminars, she met another retired ballerina, which the Destrehan resident marveled let her meet a dancer from the original cast of Fiddler on the Roof. She goes to tutu school, too.

“I danced my whole life in Natchez, Miss., and we had a tableau and the dance school, so it was the same costume every year,” Sullivan said. “My daughter falling in love with it made me fall in love with it again.”

Sullivan loved to dance, too.

“They are just so beautiful dancing in the different tutus,” she said.

At River Region Ballet, the magic of the tutu really comes alive with the perennial favorite Nutcracker ballet.

And Sullivan is contributing to their creation.

After serving as costume chair for 12 years at River Region Performing Arts and Cultural Center in Norco, she is now vice president of public relations. Melanie Fontenot of Luling, also a seamstress, is taking over Sullivan’s position. 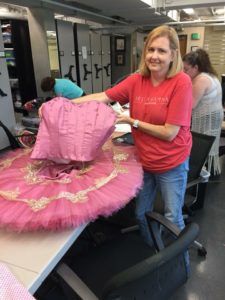 “During that time, River Region Ballet encouraged me to improve and expand my sewing skills,” she said.

And now, she’s learning how to make a classical tutu.

“The classical tutu is what we call a pancake tutu that sticks completely out,” she said. “You have to keep your hands out or you’ll squish the tutu”

Sullivan said this is the design most people think of when they think of a tutu.

“I’ve decorated them before and with a different base, but never from scratch. I wanted to learn it,” she said. “It’s an ongoing learning process. I think I could go 10 years and still there’d be things to learn.”

What Sullivan has learned is that tutu design changes, particularly with more contemporary girls wanting a two-piece tutu. But she prefers the classical tutu. Her favorite in the Nutcracker is worn by the Snow Princess. 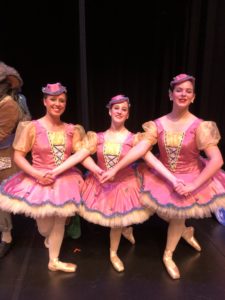 “Every girl wants to be a ballerina at some point and then comes the classical tutu,” Sullivan said. “It’s every girl’s love of becoming a princess.”

The tutu is the iconic image of this dream, and they can be designed to fit any performance.

Ironically, during Sullivan’s dancing days, she dressed as a boy in a velvet outfit that looked like a tuxedo and never got to wear a big, pretty tutu. But when her daughter came along, she set out to make up for it by making tutus for her daughter.

On Feb. 7 – 11, River Region Performing Arts is sponsoring a Tutu.com school session with Folts at the center, 15146 River Road, Norco. Women from as far away as Australia, Chicago, Arkansas and Alabama, as well as local seamstresses, are attending. For more information, call (504) 723-8576.

Destrehan marched out to a 21-0 first half lead and never looked back in a 42-6 home victory over John Ehret Friday night, continuing the Wildcats’ dominating start to the season.  […]

First Baptist Church in Luling held a sanctuary dedication on Aug. 28 – the eve of the one-year anniversary of Hurricane Ida, which severely damaged several of the church’s properties. […]