Dana Staton doesn’t want her life to be about the numbers, although it could easily be about going from 155 pounds to 113 pounds, but about the journey.

Weight loss is how it started, but as she applied herself it became so much more.

“I’d had my second child about 18 months earlier and I just really didn’t recognize myself,” said the Destrehan resident. “I felt I needed to do something.”

Driven by a desire to improve her self-image, Staton immediately did two uncomfortable things – she joined a gym and started running. Being an introvert, they were aimed at expanding her comfort zone and both turned out to be the right moves as a mother, wife and CPA.

“I didn’t really know what my self-image should be at that point,” she said. “I just knew I wasn’t it and that’s when I started trying to figure that out and find pieces of the old and incorporate a new me.”

She recognized the need to find the balance with family life, work life and gym life.

“ I think as a mom we forget about that,” Staton said.

And so began an experience that she describes as her journey.

In July of 2015, she joined nDurance Fitness gym in Destrehan – and went to the gym. Just going there was a significant step for her. She felt tired and lacked energy, which she attributed to being overweight and being the mom of a toddler at the time.

She incorporated her two daughters, in the schedule and they cam 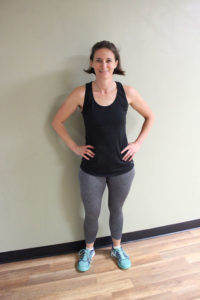 After her transformatione to love it. They also participate in runs and her oldest daughter takes personal training lessons and her youngest begs for training lessons, too which gives her the opportunity to serve a role model for her children. Staton has been a member of a group of women weight lifters for 1-1/2 years, whom call themselves “Women That Lift.”

In October of last year, she became a certified trainer. Staton praised the support she received from nDurance trainers for encouraging her to do it, as well as welcomed the opportunity to help others.

“I’m always interested in other people’s journeys and where they are, and enjoying pushing them to become the ‘better them,’” she said.

Some 41 pounds lighter later, she isn’t as caught up in the numbers anymore because there is so much more happening. The weight number on the scale stopped mattering, refocusing more on body fat percentage, she said. Staton did set goals like getting her into the 140s then 130s to reach her goal, but then also worked on becoming stronger by building muscle and becoming healthier.

“Right now, I’m happy with what things are,” Staton said. “I’m trying to figure out exactly how all this works into the rest of my life. I’m trying to take it all slowly to keep a good balance, but I also think I’m somebody really enjoying seeing other people succeed.”

As a trainer, she welcomes the opportunity to share her successes and failures with her clients.

“My goals are to work with the clients that I have so they can have success stories, and to get them to where they’re happy with themselves,” Staton said.

Historic openings for the Bonnet Carre’ Spillway in Norco in 2019 – with the area being opened twice for an extended period of time – left St. Charles Parish government and residents with a  major problem. […]

Less than a day after a Killona shooting that left a 29-year-old man dead and four others wounded, including a 14-year-old boy, St. Charles Parish Sheriff Greg Champagne spoke bluntly.  […]

Destrehan holds off stiff challenge by Woodlawn, headed to quarters

The question hanging in the air prior to Destrehan’s Class 5A round two playoff battle with visiting Woodlawn was simple: after seven games of dominance, how would the Wildcats react down the stretch of a […]