For Debbie Vial, her pilgrimage to Israel was marked by the profound sense of following the steps of Jesus and bringing that experience to life.

“Touching the spot where Jesus was born … you can’t describe the feeling,” Vial said. “You’re just overcome with that. You’re actually there. That was one of those ‘Aha’ moments.”

The steps continued, leading her to the Church of the Holy Sepulchre (12th Station of the Cross) – the place where Jesus died. She kneeled and touched the Rock of the Crucifixion. It was a move of many that illuminated the path and made it a personal journey of spirituality.

For Vial, as well as 50 others on this pilgrimage, experiencing Jesus’ life was a life changing experience.

“You go to mass, you hear the gospel and hear the readings done at mass,” she said. “In your mind, you have a picture of the Garden of Gethsemane and walking the Way of the Cross, and walking in Jesus’ footsteps in the same exact manner that he had done. It’s mind boggling.”

Vial was in the group who went on the pilgrimage June 11 – 15, organized by Father Anthony Odiong of St. Anthony of Padua Church in Luling. Most of them were from Louisiana, including Luling, with others from Texas.

“This was not a vacation or tour,” Odiong said. “It’s spiritual. We had mass every day.” 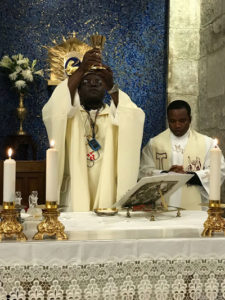 The pilgrimage began at Caesarea Maritima, a Roman city built by Augustus Caesar and by the mastermind architect Herod the Great who built the harbor that became one of the wonders of the ancient world. It was where prefect Pontius Pilate lived in the spectacular city in the center of the Plain of Sharon, one of the most fertile areas in the world.

Their pilgrimage also took them to Mount Carmel, a coastal mountain range in northern Israel stretching from the Mediterranean Sea to the southeast, and went to prophet Elijah’s Cave.

Odiong said they celebrated mass at Stella Maris Monastery  (Monastery of Our Lady of Mount Carmel) for monks is a 19th century Discalced Carmelite monastery on the slopes of Mount Carmel in Haifa, Israel. They also went to Tiberias, an Israeli city on the western shore of the Sea of Galilee, established abound 20 CE, named in honor of Rome’s second emperor Tiberius. Since the 16th century, the city has been considered one of Judaism’s Four Holy Cities and the largest Jewish city in Galilee.

The next day they went to Cana of Galilee where Jesus turned water to wine at the Wedding Feast at Cana. Nine couples in the group renewed their vows there.

At Nazareth, the capital and largest city of the Northern District of Israel, they visited the childhood home of Jesus.

“It was humbling to see where Jesus grew up,” Odiong said.

At Mount Tabor in Lower Galilee, about 11 miles west of the Sea of Galilee, he said they experienced the Mount of Transfiguration.

“You have a beautiful view of the valley,” he observed.

The days spent in Jerusalem, Bethlehem and Jericho were equally amazing, he said. They also went to Qumran, where the Dead Sea Scrolls were found.

For Denise Hymel of Luling, the pilgrimage was a tremendous experience.

“The rosary takes on a whole new level now,” Hymel said. “It seems so much more now. I just became a Eucharistic minister and I got to do my first mass in the Basilica of Annunciation. That’ll be a cherished memory for me.” 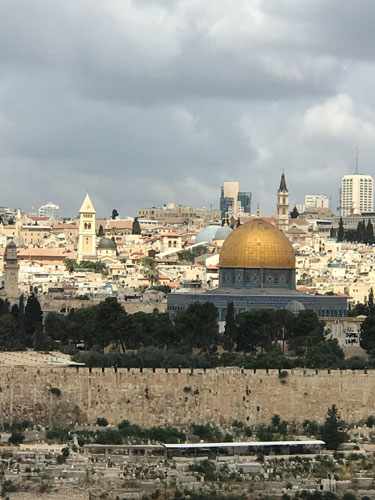 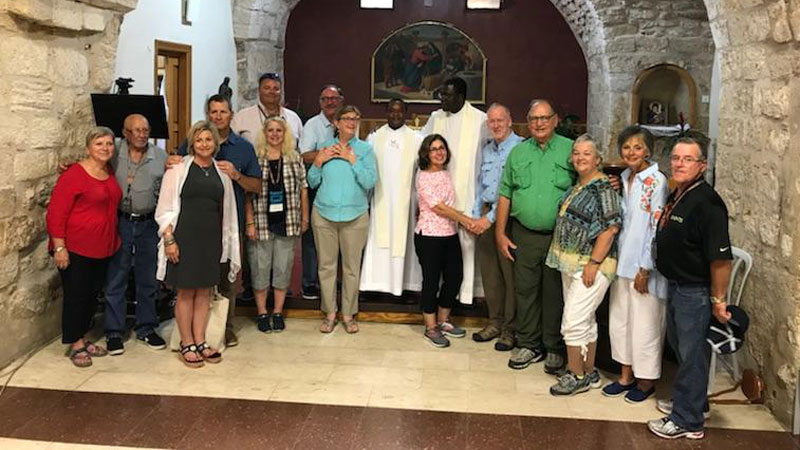