From age 11, David Pierson knew he wanted to be a writer and promised his hardworking mother he was going to be famous.

With the release of his latest novel, “And Lead Us Not,” the New Sarpy native is a writer although he readily concedes to still be working on keeping his word to his mama – even at age 70. Rich with his own life experiences as a southern writer, the political satire is based on a high school dropout from the backwaters of Louisiana who becomes president of the United States.

Pierson is just content with being read, and many of his book reviews have compared his writing style to Mark Twain.

Pulling from what he calls the “mythical world of Sarpy” for his books, he said it is really New Sarpy. It comes together on the book cover, reflecting the ferry café, where people waited for the ferry, to the Evangeline Press-Dispatch newspaper he created to provide the storyline for his main character. Wally Zeringue is a character who drops out of school in 10th grade, becomes a famous, wealthy entrepreneur and gets nominated as vice president of the U.S. The president-elect dies, making way for Zeringue’s ascendance to president. 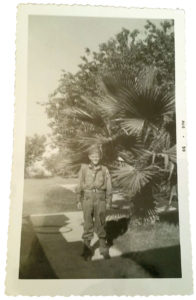 “I got the idea because, at the time, Ross Perot, was running for president and it had all the sentiment against Washington politics,” Pierson said of his comic novel. “I thought, ‘What happens if an entrepreneur with no political connections takes over the helm?’”

Zeringue fills the role alongside his character Dan Bitterman as a former classmate and reporter at the Evangeline Press-Dispatch exposing dirt on him, and all with New Sarpy serving as a backdrop for the story.

A classical southern writer, Pierson wrote the book 25 years ago, but the timing didn’t seem right for its release until now – and with his sister’s encouragement. His persistence in his work is partly due to his changed outlook for what it takes to be a writer in today’s challenging times.

“I’m interested in readers. If they read you they’ll spread the word. I’m 70 years old, an old person, all I do is write and write and write.” — David Pierson

“I’ve had to let go of the dreams that all writers have of big sales and a movie deal,” he said. “I’m not interested in book sales; I’m interested in readers. If they read you they’ll spread the word. I’m 70 years old, an old person, all I do is write and write and write.”

Pierson’s devotion to his mother, who was recognized as working at Richard’s Department Store once on Apple Street in Norco, is the driving force to his work.

“My mother was a great woman,” he said. “She was raising four kids and at a time we moved back to Louisiana from California after our father left us.”

He added, “To me, she was the most heroic character I’ve ever come across. She was a saint.”

Fighting back tears, he recounted accompanying her at night hanging clothes outside their little house in “old Destrehan” – the only time she had to do it with her demanding day – when he told his “big dark secret.”

He remembered telling her, “Everything is going to be okay. I’m going to be famous one day.”

Pierson has found his own notoriety as founder of the longest-running scholastic chess league in the country, the Louisiana Scholastic Chess League. He lays claim to being the most checkmated person in the history of the game. (That’s because he has drilled nearly 5,000 young people on how to force checkmates on their opponents with two rooks, a queen or one rook.)

A St. Charles Parish native, Pierson labored many years as a newspaper reporter and magazine editor before returning to the classroom as a high school English teacher.

“I found out being in the classroom I was on stage,” Pierson said. “That’s me. So, I’m teaching – I’m storytelling.”

The fuel crunch throughout Southeastern Louisiana has hit residents hard, and while lines are beginning to shorten as more fuel stations begin to open, a trip to the gas station more often than not still requires a […]

Destrehan revs up in 2nd quarter, surges past Hahnville in opener