When the Hahnville football team earned its first win of the 2022 season, a dramatic 42-41 overtime victory over Mandeville, there was nobody prouder than Donovan Friloux.

The senior quarterback entered the season as the centerpiece of a talented and experienced Tigers offense. That offense was as advertised against Mandeville, but with a change in one specific detail: Friloux didn’t take a snap that night, nor was he dressed out to play.

Instead, the senior season he’s dreamed of since he was young and the chance to quarterback Hahnville at the peak of his ability in prep athletics was stripped away before the regular season ever began. Friloux suffered a season-ending knee injury against Jesuit in the preseason jamboree, tearing both his ACL and MCL and spelling the end of his football career at Hahnville.

“It was definitely a big dream of mine … always, as a young kid,” Friloux said of quarterbacking the Tigers. “Playing tackle football when I was young, I always thought about getting to the high school level and playing. I’d come watch Hahnville play as a kid, watch the outstanding talent play out there right before my eyes and I knew, ‘I want to be that guy.’ Even in middle school, watching Pooka Williams and thinking, ‘Wow, he’s incredible.’”

Friloux indeed got to do just that at Hahnville for a time. As a junior, he started all nine games for the Tigers and helped lead his team to the Class 5A playoffs. The playoff push included a six-game winning streak to close the regular season after an early 0-2 hole.

Year two was supposed to be his chance to build upon that experience – “Everyone’s first year is hard. The second year? You have a little more chemistry with one another,” he said.

But against Jesuit, he made a cut while running, and instantly realized something was wrong.

“I heard it pop,” Friloux said of his knee. “From what everyone said, I knew what had happened. For me, I was trying to uplift myself and tried to think of the best case, and not the worst-case scenario. But yeah, I knew what happened. I could see it on people’s faces.”

He had an MRI done on his knee, and the results were confirmed. The season he’d dreamed of for so long would never happen.

Despite that, he wouldn’t sulk.

“He came in right after and talked to his teammates, and the message was clear,” said Hahnville head football coach Daniel Luquet. “He said this season’s not over. The expectations are the same. Make the playoffs, make a run …  It’s been important to him to be with his guys, help (backup quarterback Ryan Gregson) learn the ways. Donovan’s still the leader of this team, no matter what cards he’s been dealt. He’s gonna live up to it the best he can, and I’m very proud of him.”

Friloux said his first instinct after hearing the bad news about his knee was to find a way to help his teammates. 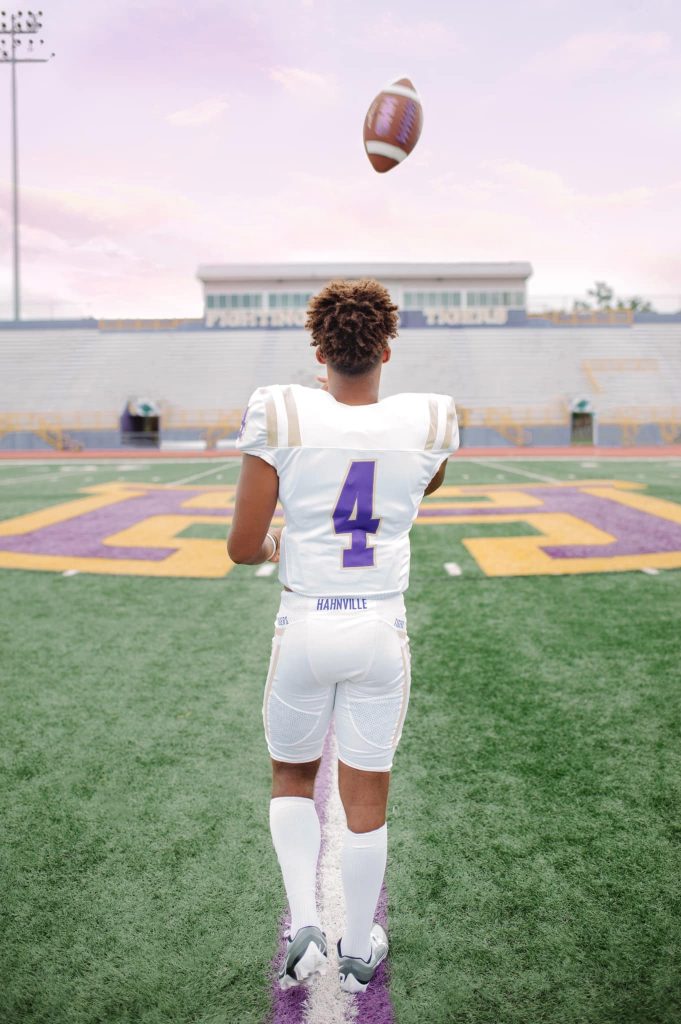 “My first words after the MRI were ‘How can I help the team?’ I knew I couldn’t be on the field. But since I’ve been in high school, all my time has been spent on that football field or the baseball field. It’s what I know, and it’s been my way of coping with problems I might have and things like that. So, it’s how can I bring my teammates up, because I love them to death,” Friloux said.

“I told them, I’m ride or die behind y’all. I told Gregson, there’s nobody on this planet I’d rather see take my spot besides you … this is football. You’re gonna go through a lot of adversity. You will, and it gets better.”

The Week 3 game between Hahnville and Northshore, a 17-10 Tigers victory, was the first game of the season Friloux wasn’t with the team – he underwent surgery last week on his knee and was at home recovering. He said the Mandeville game will also be the last he isn’t with the team, as he’ll be right back on the sideline. Friday night he returned to his teammates’ side as the Tigers faced off with Destrehan.

The surgery was a success – he said his repaired knee will be even stronger than the non-injured one upon recovery, and he should be a full go to return to athletics in approximately six months.

“I’m already feeling better, as it is,” Friloux said.

And although that won’t render him able to play football again at Tiger Stadium, Friloux’s refusal to fold in the face of his personal setback and turn adversity into an opportunity to help his team has ensured his senior season will in no way go to waste – perhaps even setting the kind of positive example that can inspire others within the Tiger program and have a lasting impact for years to come.

“They aren’t down on themselves and they’re not asking those ‘what if’ type questions,” Friloux said. “We can move on. We can play football. My teammates are just like me. They love the game of football.”

When St. Charles Catholic put the finishing touches on its second consecutive state football championship this month, it was the latest chapter in the story of a program that’s evolved into one of Louisiana’s powerhouses. […]

On Jan. 16 Jim Coleman will turn 100, and he will undoubtedly spend his morning the same way he does every other day – by sending out a devotional text to his friends. […]