Charles Slade displayed a Facebook page where he keeps his memories at the St. Rose Library, but it’s also a place he goes to for air conditioning because it’s hot at the tent he calls “home” behind the levee.

“I had everything I wanted in life and it started falling apart,” Slade said. “I get very depressed, but I keep going. If I were a watch, I’d be a Timex. I take a lickin’ and keep on tickin’.”

He lost his home, wife and job, which he blames on them as a couple and his Baton Rouge company that went bankrupt. He also said he drank too much and the couple spent too much money.

“It was both of us,” he said. “But losing her … I just gave up. Sometimes this feeling of doom comes over me.”

The downward spiral of his life has left him hopeless and homeless in St. Rose.

“I lost pretty much everything I had,” he said. “This includes my home, too.”

He lives in a tent behind the levee that few could find without Slade’s direction.

It’s hidden in a grove amid willow trees waving in a cool breeze from the Mississippi River nearby and the bellowing horns from distant boats passing by. The river is so low now that Slade walked his path to the bank and down it to an area that looks more like a beach, but it also means his makeshift home will be gone when the river rises.

Even so, it’s only a place where he stays, and barely a step up from the time he really considered himself homeless when he slept on the ground with no tent.

Under the canopy of trees, Slade pointed to his “main tent” where he sleeps and keeps his few belongings, and an attached tarp that provides shelter for him to sit outside. There is even a crude fire pit where he cooks his meals – and there are few of them that depend on finding odd jobs at “ridiculously low rates.” A swing he made from driftwood hanging in a tree nearby is where he deals with stress and reflects on his life.

Slade said he was an electrician and had money until his life fell apart.

Today, he wears most of the clothes he owns and goes to a nearby baseball field to get a shower. He said he feels bound to his despair without a permanent address, dealing with health issues and his own fears about resuming his life for the last two years.

Slade added, “I could go take a piece of cardboard and just stand on the corner and get money, but I won’t do that.”

Behind the levee, life is hard fighting mosquitoes and intense heat, he said.

“I started seeing alligator tracks and coyotes,” he said of his initial location on the riverbank that warranted he relocate to his current encampment. “I’m closer to where the fishing is good. It’s kind of like camping in a vacation that never seems to end. It’s not that great because of the heat, the mosquitoes and just being outdoors all the time.”

A lack of good food has caused health issues, including blisters on his hands that he believes is from malnutrition. Slade said he has no health insurance and can’t afford medical care.

Yet, he recalled last Christmas when someone left him a bag of food with $20 in it. Day to day, he’s survived insects, snakes and alligators, and even storms that made his tent collapse. He’s begun to study birds and noticed cardinals get along with wrens, and mockingbirds chase away crows.

But his biggest struggle remains finding hope about his life and particularly about finding another home.

“There are times I just want to give up and I want to swim out to the middle of the river and give everything up, but it’s like something keeps me from doing it,” he said. “A lot of people tell me it’ll get better. It’s been over two years, it’s living like it’s hell.” 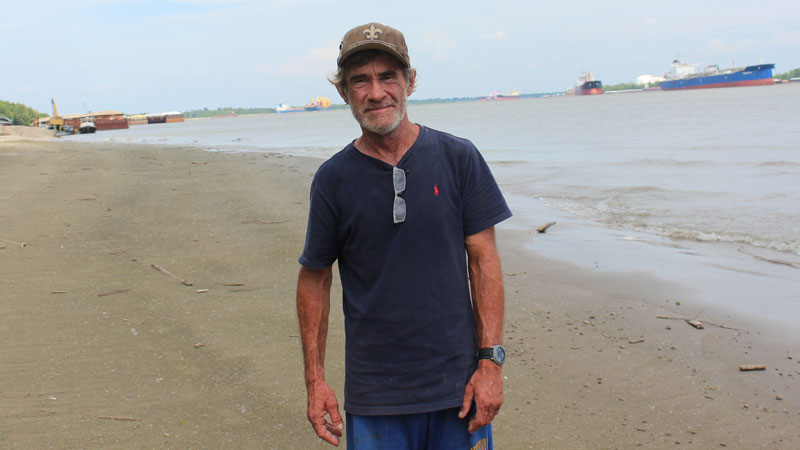 Bayer to pay 10.9 billion to settle lawsuits over weedkiller

Bayer will pay up to $10.9 billion to settle a lawsuit over claims the weedkiller Roundup, a herbicide product of its subsidiary company Monsanto, caused cancer. […]

St. Charles Parish will hold one of its first celebratory gatherings since the onset of COVID-19 as the parish announced its annual Independence Day celebration will be held July 3 at the West Bank Bridge Park. […]

Medical providers across the country are reminding patients that the coronavirus is not the only illness they should be worried about. Monitoring chronic conditions, especially in the midst of a pandemic, is crucial to health and longevity. […]