Ken Follet’s novel The Pillars of the Earth begins after the English ship the White Ship sinks in 1120 with King Henry’s heir aboard. The kingdom is then thrust into a state of panic, for the prompt death of the King without a proper heir to the throne causes The Anarchy to begin. Two potential heirs rise to take the throne. The late King’s daughter, Maud, and his nephew, Steven of Blois, fight over power with nobles and churchmen behind them.

The Pillars of the Earth is divided into six sections including a prologue, each exploring the development of the civil war, religious conflicts, political loyalties and medieval architecture. Ken Follett’s novel is noted as being historically accurate and represents medieval life precisely. The novel is centered on the building of a cathedral in the fictional town of Kingsbridge, tracking the development of Gothic architecture.

The Pillars of the Earth was fascinating, a window into the medieval era. Little practices such as horses and livestock being brought into the house or arriving at a neighbor’s house and just walking in unannounced, really bring you into the past. The novel keeps the reader invested with moments of happiness and love, which quickly transition into scenes of violence and malice. This emotional rollercoaster along with the unique and accurate look into medieval life combines into a great novel I strongly recommend you read. 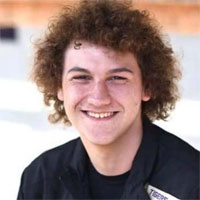 Alex Hebert was a graduating senior in the Gifted program at Hahnville High. He enjoys sciences, history and watching softball. He plans on attending LA Tech, majoring in Biomedical Engineering and serving part-time in the Army National Guard.

Travis Snell Boatright, 73, a native of Camden, AR and a resident of Paradis, LA passed away on Tuesday, March 10, 2020 at home surrounded by family and friends. A celebration of life will be […]

Lynn Pershing Hogan was called home on March 29, 2020 at the age of 80 after a long hard-fought battle with dementia, Alzheimers and cancer. Lynn was born August 29, 1939 to Lynn Leo Hogan […]