It’s been nearly two years since the demise of the little cypress tree that stood alone in the shimmering waters off Bayou Gauche that was appreciated by so many people.

One morning in August of 2018, witnesses reported the tree still standing and then saw a barge moored to it later in the day. When the barge was removed, the tree had been ripped by its roots and laying on its side in the water.

Many lamented its loss and were even angry over losing what they considered a landmark for the area. 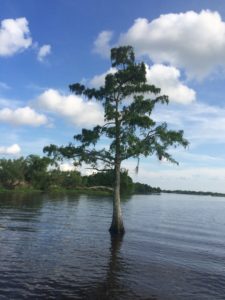 “This beautiful tree was a landmark for our Dufrene family from Bayou Gauche during its early beginning in [the] early 1940s,” Hogan said. “My grandma, Memere Leonise Dufrene Matherne, once moored her houseboat – camp boat near it when land surrounded it” at that time.

At 76 years old, Hogan has lived in Bayou Gauche since birth. She recalled when Entergy first installed electric lines there, as well as the little tree that was a quarter of a mile from her camp boat.

Over the years, Hogan said erosion had taken its toll, leaving the tree standing in the water several feet from the shore.

Hogan was among numerous people who eulogized the little tree.

Local fisherman Troy Gaubert said he’s admired it for years on his many fishing trips on the bayou and asked for help on the Facebook page, “Life in Bayou Gauche.” It drew an unexpected response from people who called for action and preservation.

Gaubert and others hoped to save the tree, but it was beyond help.

Resident Earl Matherne gathered information that led to the barge number and well permit and reported it to the Louisiana Department of Natural Resources (LDNR). The information pointed to Costa Energy in Irving, Texas, which could not be reached by press time.

Since that time, LDNR has taken action against Costa Energy. 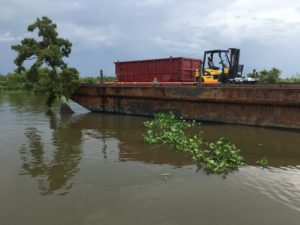 Matherne said the company has been ordered to plant five to 10 trees (a minimum of 12 feet tall) near the spot where the cypress was destroyed in an attempt to mitigate the damage.

LDNR will enforce the planting and notify Matherne when it’s done.

“The company will be responsible for the survival of the trees,” Matherne said.

Hogan, as did Matherne, acknowledged the cypress tree as a longtime landmark.

“It has been missed by our family,” Hogan said.

Her family lived on the land and water.

They came from at least three generations of living on houseboats until they moved into houses on land. In those many trips on water, she recounted seeing the little tree when they left the lake.

“It was literally a landmark for marking the edge of the water and the property,” she said. “It was where people used to have their camp boats parked.”

As the land eroded, the tree eventually stood alone in the water.

Like many residents there, Hogan admired the tree. And when Gaubert and Matherne tried to get the state to intervene, she wanted to thank them for their help.

“I love cypresses,” she said. “I just didn’t like the idea that it wasn’t there anymore and a landmark I hoped to share with my grandkids was gone. I didn’t want the tree to go before its time.”