Betty Jackson is used to planning social events for the residents of the Luling Living Center, but this year she had to figure out something different for Mother’s Day because of the coronavirus pandemic.

“Normally we do activities on the Friday before Mother’s Day,” she said. “But with the virus the family members can’t come in and visit with their loved ones … I was thinking of what I could do, and God laid this parade on my heart.”

Instead of the traditional annual gathering, Jackson organized a parade of over 100 cars.

Jackson said residents and family members were so happy to see their loved ones.

“It was awesome,” she said.

Cherie Theriot, the center’s social worker, assisted in the planning of the parade.

“The residents really loved it and I think that we were surprised by the number of people that showed up,” she said. “A lot of the staff was crying because it was so touching.”

Theriot said it was remarkable to see residents, even some who suffer from dementia, recognize their family members. She said center employees are assisting residents in receiving weekly FaceTime calls from their families but said the calls can be confusing to residents with dementia.

“Being able to actually see them like that was really great,” she said. “The community came together to honor residents … people brought in snacks and flowers and made posters.” 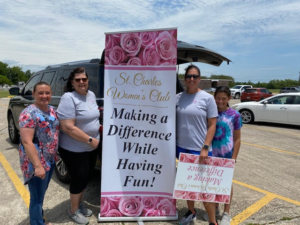 Theriot said she knows the parade meant a lot to the residents.

“I think it was really important,” she said. “It helped with the morale of the residents … they’re anxious for their families to come back in and they ask often for visitors.”

Theriot said she hopes the parade will help residents get through the next phase of quarantine.

“We feel like we’re seeing the light at the end of the tunnel,” she said. “They’ve been troopers.”

Center Administrator Michael Guillera said the entire staff is thankful to the families, the St. Charles Parish Sheriff’s Office, St. Charles Women’s Club and the fire department for making the parade a success.

“We were shocked with how many people participated,” he said.

Kernan said the St. Charles Women’s Club was honored to be able to participate in the celebration.

“It was a beautiful day and such an emotional experience for us all,” she said.

Each year as the temperature climbs outside interest in water-related activities inevitably rises as well. And while in past years the Ormond Splash Park has opened in May, damage from Hurricane Ida will delay that early of a start this year. […]

About Monique Roth 648 Articles
Roth has both her undergraduate and graduate degree in journalism, which she has utilized in the past as an instructor at Southeastern Louisiana University and a reporter at various newspapers and online publications. She grew up in LaPlace, where she currently resides with her husband and three daughters.
Website