Tuesday may have marked the start of the Major League Baseball playoffs, but elsewhere in Paradis, Destrehan’s Ryley Boyne proved to be quite the closer on the volleyball floor.

Boyne slammed down three consecutive kills to finish off Destrehan’s 3-0 sweep of Hahnville, 25-19, 25-16, 25-22 in front of a festive and charged up crowd at J.B. Martin Middle School’s gymnasium.

“I was so excited … I was thinking I wasn’t going to get to the front row and I was like, I have to get there,” said Boyne, Destrehan’s leading hitter and a McNeese State commitment. “I want to end the game. I finally got there and thought, just send me this ball, please. And after that first kill, I felt like I was heating up.”

Though Destrehan won all three sets, each was a back-and-forth battle that saw Hahnville threaten to earn a win before the Wildcats dug in and finished strong. Each team has had a strong start to the season, but Tuesday’s matchup carried extra significance despite the rivals competing in different districts – neither squad had competed back home in St. Charles Parish since Hurricane Ida tore through the area, playing all matches prior on the road.

A gym full of vocal supporters, including strong student sections and their chants back and forth, welcomed the Wildcats and Tigers home.

“Especially because we haven’t been able to do this in so long … I don’t remember the last time I played in front of a crowd like that,” Boyne said. “And especially with the rivalry, it meant so much more.”

For others, it was in fact the very first time in front of a crowd like that in varsity volleyball competition. Khara Morton, played for Destrehan’s freshman team a year ago, but after a breakout offseason, she jumped junior varsity to become a starter for the varsity. She was among Destrehan’s leading hitters on Tuesday. 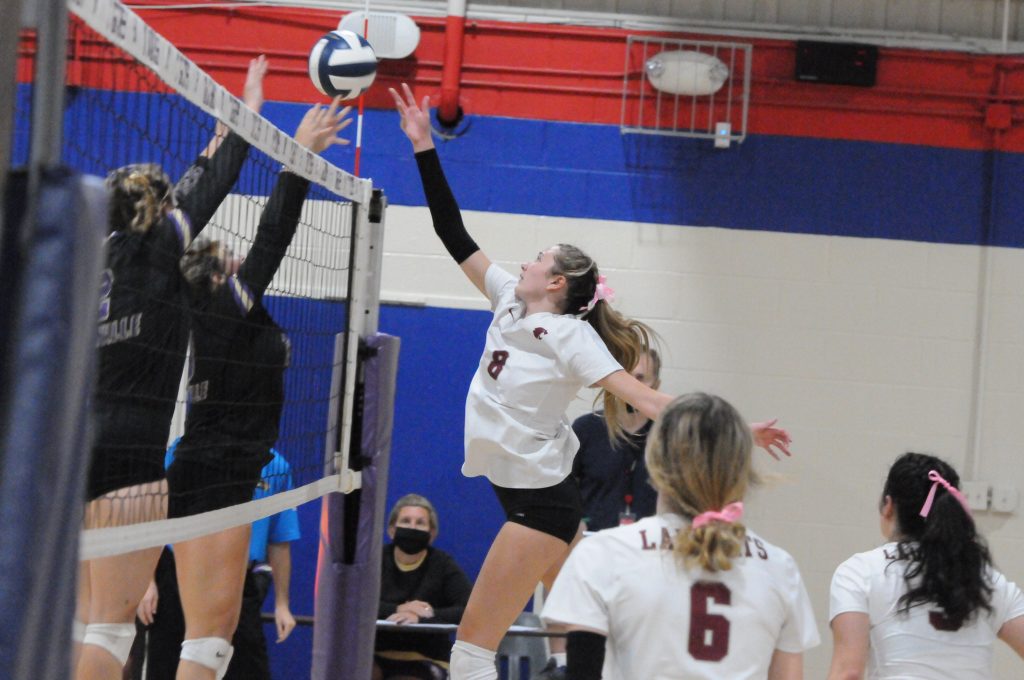 “I was very nervous,” Morton said. “My team kept me up, they told me not to be nervous, but I have to admit I was at first.”

Destrehan’s Skylar DeFrisco served an ace and Boyne drove home a kill to finish the first set, but Hahnville charged out to a lead in the second, scoring five straight points to take an 8-4 lead.

The Wildcats battled back to tie on a double block by DeFrisco and Lily Hayes. Hahnville recaptured the lead on a kill by Trista Naquin, who added a strong performance in the match to her standout season.

“She’s consistently hitting in the 300s … she’s really having a great season,” said Hahnville head coach Mendi LeBoeuf. “She keeps a next point mentality and really does a great job leading us. I think she was great last year and matured a little bit from that. She’s huge for us.”

Destrehan (7-3) surged back ahead, taking a 16-14 lead on Sadie Rochelle’s kill. Ella Wilkie cut the lead to one with one of her own for Hahnville, but then Destrehan posted a string of points, some aided by Tiger mistakes, to take control.

“We gave up 17 points on unforced errors in that second set,” LeBoeuf said. “We have to take care of the ball. I thought we worked hard, played really hard and competed. I’m pleased with that, but we’ll have to execute a little more consistently to come away with a win.”

Hahnville (7-5) didn’t deflate, though, and led for a strong portion of the third set. An early kill by Karlie Dufrene seemed to ignite the Tigers, who posted a string of points capped by a Dufrene ace to lead 9-5. Later, consecutive points by Naquin on a kill and dink respectively helped Hahnville surge out to a 14-9 lead.

But after Hahnville’s Colby Mayeux served an ace to make it a 17-11 Hahnville lead, Destrehan began to cut into the advantage. Two Morton kills highlighted a push to make it 18-16. Naquin scored for Hahnville on a kill and Destrehan then returned long and out of bounds to establish a 19-16 lead for HHS, but a 4-0 run by the Wildcats put DHS ahead.

Back-to-back tip scores by Hayes put the Wildcats on top by two. Naquin made a kill and Sandy Bourgeois an ace to tie things up before Boyne took over for Destrehan, scoring the final three points of the night.

“I’m very lucky to have six seniors out there who don’t get rattled,” he said. “They understand scenarios and situation, and understand when it’s their turn.”

For Destrehan, Boyne finished with 17 kills and 10 digs, while Morton had seven. DeFrisco had 30 assists

St. Charles home to 2023 Teacher and Principal of the Year