For five softball players, a season is yet to come, and for two volleyball players, their careers on the prep court are behind them.

But on the morning of Dec. 15, all of their eyes were on the future.

Hahnville saw seven players sign on the dotted line, inking letters of intent to declare their collegiate destination on the opening day of the early signing period last week. Kate Bruce and McKenzie Kliebert are on their way to play softball at Christian Brothers, while teammates Sara Roussel (LSU-Eunice), Laney Waguespack (Co-Lin) and Avery Edgar (Coastal Alabama) are likewise moving on to the next level. Volleyball standouts Trista Naquin and Colby Mayeux will remain teammates, as they are on their way to Millsaps College.

Jerry Nugent, administrative monitor at Hahnville High who stepped down after seven years as the softball team’s head coach, praised this class of signees, noting they faced some very unique challenges due to the recent circumstances of COVID-19 and Hurricane Ida. 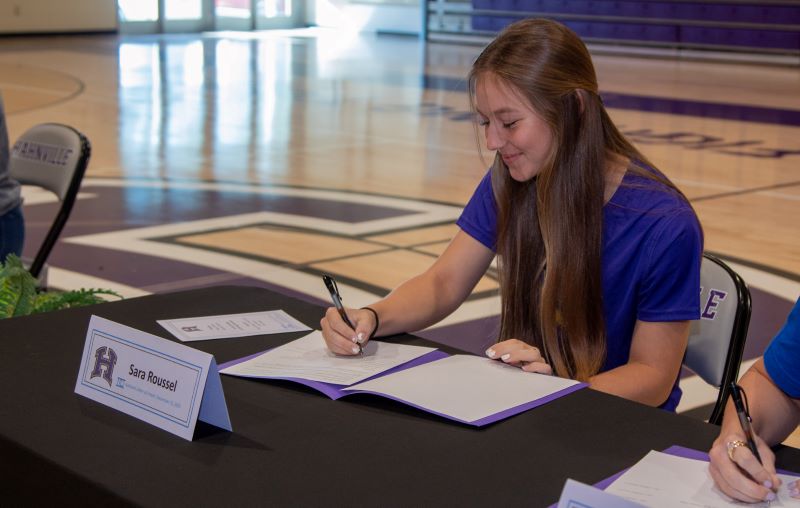 “It’s really hard to get signed right now because of what every kid in high school has been through the past three years,” Nugent said. “You have kids who lost their entire sophomore season to COVID. Then it’s just been very hard to get seen because you have the limited capacity at stadiums … senior year is out of whack with Ida. It’s a testament to a group who knows how to fight, how to persevere, who don’t look at it like a setback but an opportunity to show even more grit.

“They didn’t lose sight of their goals. They continued to move forward.”

Naquin and Mayeux did not have an easy job this season. They were among eight seniors tasked with leading and holding together a season interrupted and altered in numerous ways by Hurricane Ida, but Hahnville nonetheless went 18-10, reaching the postseason once again.

“They’ve been through a lot in their high school careers, with COVID and then the hurricane this year,” said Hahnville head coach Mendi LeBoeuf following the season’s final game. “They came to practice every single day excited to work and they worked hard. They love each other and play for each other.”

The two hitters gave Hahnville punch at the net, and Millsaps certainly noticed.

For Naquin, it’s an exclamation point on a season that saw her voted as District 6-I’s Offensive Most Valuable Player.

Kliebert, Bruce, Edgar, Roussel and Waguespack have a season yet to play ahead of them, and one likely to carry strong expectations. 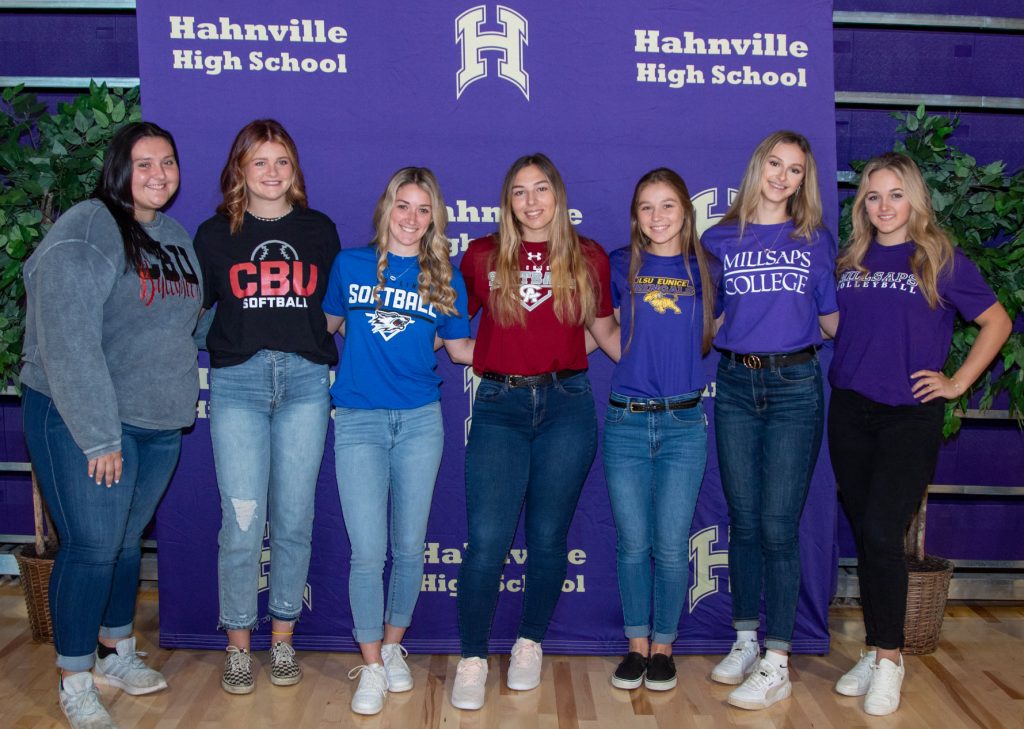 “Really, those incoming freshmen in 2019 kind of became the foundation we were building off of after that ‘18 class graduated,” said Nugent, alluding to the 2018 Hahnville team that reached the 5A championship game. “They’ve lived up to expectations. It’s a hard-working group of kids, a very smart group of kids, they don’t back away from challenges and love to compete.”

Waguespack called it a special day, especially sharing it with the group seated around her.

“It was awesome, because we all grew up together,” Waguespack said. “We all accomplished something great together.”

She called the signing the culmination of a dream.

“Ever since I was a little girl,” said Waguespack, who forms a strong 1-2 punch with Kliebert on the mound for Hahnville. “Since I was 5, I dreamed of playing college softball … the coaches (at Co-Lin) were a big reason I wanted to go there. The campus is beautiful and I can’t wait to play for them.”

Collectively, this signing class showed great perseverance. Beyond COVID and Hurricane Ida, Waguespack also overcame another major hurdle to reach her signing day. During her freshman season, she took a line drive to her face while pitching for the Lady Tigers – her protective mask warded off serious injury beyond some significant bruising and swelling. She said what was a mental hurdle turned into motivation.

“That was a step back,” she said. “But I think it pushed me more to get better. It made me work harder to be a better pitcher who could get to the college level.”

In year one under head coach Troy Green, Destrehan learned his way of doing things on the basketball court. […]

Students from several St. Charles Parish Public Schools were the beneficiaries of free uniforms and hygiene kits thanks to the Junior Achievement of Greater New Orleans. […]