Since 2017, Cara “Moon” Ursin has been able to call herself a state basketball champion, an accomplishment she shares with her Destrehan teammates from their unbeaten season.

She can now add “national champion” alongside that accolade.

Ursin and the Baylor Bears edged Notre Dame in a thriller of a NCAA Division I championship game, winning 82-81 in a game that came down to the final seconds. Chloe Jackson’s layup with six seconds left lifted the Lady Bears to an 82-80 advantage and proved ultimately the winning bucket. 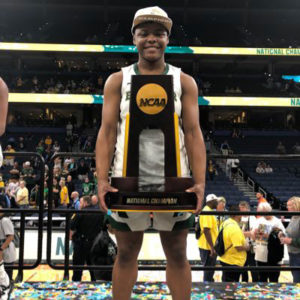 The proud Destrehan alumnus tweeted out a trophy emoji along with her new Twitter profile picture, holding the Women’s Basketball Championship Trophy. She played eight minutes in the championship game and grabbed two rebounds to go with an assist.

More importantly, however, the sophomore guard and defensive stopper was entrusted to play in the game’s final minutes, and she paid that trust back by pulling down an offensive rebound in the last two minutes and assisting Jackson on a go-ahead jumpshot with 35 seconds left.

“I’m so, so excited for her,” said Angi Butler, former Destrehan girls basketball head coach who guided Ursin throughout the latter’s run at the school. “And I’m so proud to be able to say I was the one with the opportunity to coach her.  I know Cara had the naysayers who said at Baylor, yeah, you can go to the Final Four, but you won’t win one. They said the same thing about our program here … now, she has a state championship and national championship ring, to show how talented she is.”

On Notre Dame’s final possession, it was Ursin who took on the assignment of guarding Arike Ogunbowale, the Irish’s leading scorer.

“(Mulkey) asked who was going to guard her, and Moon said, ‘Coach, I’ll take her,’” said Butler, who was in attendance for the championship matchup. “She said (with Baylor up by two) she wasn’t giving her the three. At worst, she drives and takes a two or goes to the line and forces overtime. But whatever she got, Moon was gonna make her work for it.”

Butler said when speaking to Ursin prior to the game, the latter was worried she might not get much playing time before the family and friends out to see her.

“I told her, we’re not here to see you play, we’re here to show our support,” Butler said. “But I also told her I had a feeling she’d be needed.”

Baylor finished the season 37-1, and Ursin’s role grew and grew as her sophomore year rolled on.

“And she’s a crowd favorite,” Butler said. “When she goes in, everyone yells ‘Mooooon .’ She’s so genuine and takes time for every fan. They all love her.”

St. Charles Parish public schools would be completely desegregated by the end of the 1960s, but while plans and preparations by the school district were made throughout the decade to make that a reality. […]