Luling native Angelle Sampey is a record setting motorcyclist, has nailed down the most wins of any female to ever compete in professional motorsports and is a three-time NHRA Pro Stock Motorcycle World Champion – three-time, for now.

Sampey has a chance this weekend to become a four-time world champion when she takes to the course this weekend in Pomona, California for the Auto Club NHRA Finals. Sampey is in a heated battle with fellow top riders Matt Smith and Steve Johnson, and this weekend’s race will determine the victor. Sampey must win at least one more round than both Smith and Johnson. To get to this point, Sampey earned her 44th and 45th career victories, the two coming in a span of three events.

Were she to clinch the overall points crown this weekend, it would be championship number four for Sampey, whose legacy in the sport was very secure long ago.

But this one would also mean, by far, the most to her.

Sampey won each of her three crowns in consecutive years, from 2000 to 2002: her last world championship win was nearly 20 years ago, and a retirement ago, at that. Sampey left the sport behind in 2008 after a wildly successful 14-year run, seemingly closing the book on a dream that began in her teen years, when she would race dirt bikes with her brother.

“I had no intention of ever returning,” Sampey said. “I was married, we had a little girl, life at home was all I ever dreamed it would be.”

Six years later, she got a phone call and with it a request to make a return to fill in for a driver for her former team. That was supposed to be a temporary return.

It was not. Sampey’s competitive instincts were back in high gear.

But her results weren’t – not immediately. Excited at the prospect of her two daughters being able to see their mother speed to victory after victory, instead she found something of a struggle. 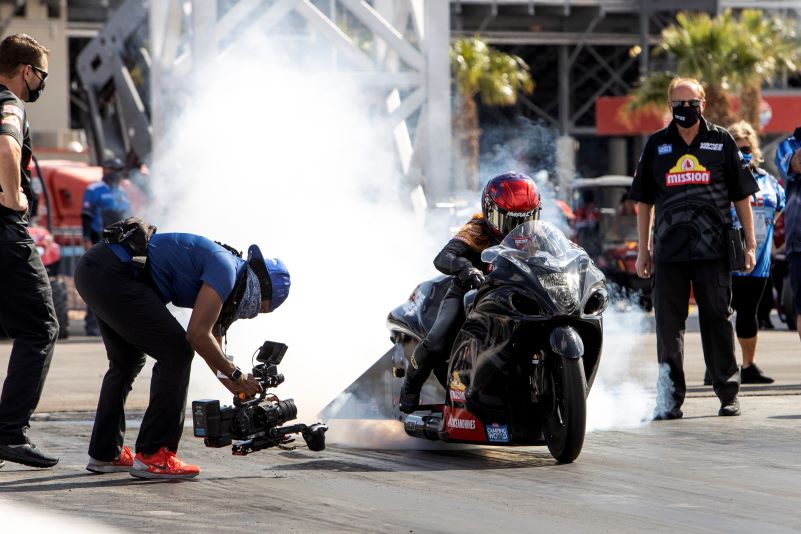 She admits it got to her.

First, Sampey got her weapon of choice back. After riding a Harley Davidson for some time after her comeback, Harley withdrew from the sport entirely and ceased sponsoring. Her team switched to Suzuki – Sampey, incidentally, won all three of her world championships riding a Suzuki.

She began finding success again and toward the end of this season, for the first time in many years – she began to feel like she could not only compete with the best, but that she could once again be the best.

“This was the first year I thought I was capable (of winning a championship) again,” she said. “I had my confidence back.”

Were she to secure the championship this weekend, it would be an accomplishment standing alone among the many she’s garnered over her career.

“This one would mean so much more,” Sampey said. “It all means so much more this time around. My first championship, I didn’t understand how big that was. Winning almost came easy … it’s really a struggle now. The competition is so much more fierce. I’m not as young as I was … I have two daughters looking up to me. So, to do it now, it would be even more special.”

Her earlier struggles since returning are now something she calls a blessing.

“That my daughters watched me struggle and struggle and not quit, keep working and pushing and then starting to win again, I think it’s better that way,” Sampey said. “It happened the way it needed to.”

Another reason things mean more these days: Sampey is riding with a purpose. She grew up in St. Charles Parish and lives in Lafourche Parish now. Hurricane Ida ravaged both. In the immediate aftermath, she vowed to win for her community. She came up just short in her first two races, but in Charlotte, three weeks after the storm, she broke through and captured a win, dedicating it to her home region.

“I was racing for all of the communities around here,” Sampey said. “(Ida) was what set that fire beneath me. I felt like I needed to win the race to bring some kind of joy and excitement to my friends and family and everyone else. I raced my butt off to get that win, and I finally got it.

“I grew up in St. Charles Parish and I’ve lived in Lafourche for 20-plus years. I love both of them and the support I have from everyone is amazing. So, when I race, and when I win, it’s for all of them.”