The order specifies there is no grievance against Hahnville High School but that Hahnville must follow the court order of restraint against ineligibility, if granted, thus protecting the school from LHSAA punishment for doing so.

Days after his appeal to return to the football field for Hahnville High School was denied by the Louisiana High School Athletic Association, Andrew Robison still had no clarity as to why.

“It’s something that definitely messes with you a lot.”

The case is headed to third-party arbitration. Robison’s family is also exploring options to take legal action after the ruling, which was the latest twist in a summer saga full of them.

After establishing himself as one of the state’s best quarterbacks and collegiate prospects while playing for Vandebilt Catholic High School, Robison found himself at a crossroads when the school elected to not renew the contract of his father, Drew, who was Vandebilt’s head basketball coach and the offensive coordinator of its football team.

Their family of five moved into the Hahnville school district after electing to not enroll Robison back at Vandebilt for his senior year, noting that the loss of half the household’s income made a return unrealistic. News broke in May that Robison was transferring to Hahnville. It was expected he would emerge as the Tigers’ starting quarterback after passing for nearly 3,000 yards and 30 touchdowns as a junior at VCHS.

“The whole summer, I thought nothing of it … I thought we would never interact with Vandebilt Catholic again,” Robison said.

But approximately a week before Hahnville’s preseason jamboree, Vandebilt Catholic reportedly made three official complaints to the LHSAA, alleging Hahnville improperly recruited Robison to their school. Two days before the jamboree, the LHSAA announced its investigation found evidence of violations and handed down major sanctions: Tigers head coach Nick Saltaformaggio would be suspended for four games, Hahnville would be fined $2,500 – and Robison’s high school athletic career would effectively be over, the senior declared athletically ineligible for a calendar year.

Most attention has centered around one specific complaint that Robison was given a Hahnville jersey to wear at a photo shoot to appear on the cover of a Louisiana high school sports magazine. Noted at the hearing was that Vandebilt Catholic head coach Jeremy Atwell had declined to allow Robison to wear his Vandebilt Catholic jersey for the shoot — a fact the coach apparently admitted to LHSAA investigators — noting it would not be fair to Atwell, as Robison was leaving the school. The receiving of the jersey before Robison was officially enrolled at Hahnville was alleged as a violation and possible inducement for him to attend HHS. 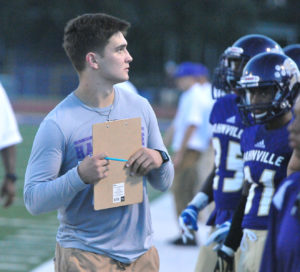 Last week, the LHSAA heard an appeal by the St. Charles Parish Public School District on behalf of Robison, who also read a statement on his own behalf. It was denied, with the provision Robison would have the opportunity to play again only if his family returned to Houma and that he re-enroll at Vandebilt Catholic.

It wasn’t a realistic prospect for him. At the hearing, Robison told  LHSAA representatives Atwell threatened to “make sure (Robison) will never be eligible at Hahnville,”  that Atwell told him after the transfer that he hoped Robison’s team would have a terrible season so Atwell could tell him “I told you so.” He also said that his locker was broken into on the last day of exams, but that Atwell responded, “Maybe the janitor did it,” and Robison said he saw other players on the team wearing his things.

Robison said Monday that he only felt he needed to make that part of his story known for the LHSAA committee to review.

“It really upsets me that they had a chance to fully sign off to make me eligible and they didn’t … but I don’t think it’s my position as a player to bash another school out of spite. I won’t speak poorly on Vandebilt or Coach Atwell,” Robison said.

In the immediate aftermath of the ruling, though, Robison told the committee he could never return to Vandebilt given those events and even if he could, the family didn’t have the money to do so. His mother, Coyler, asked for a re-vote in tears but was denied.

“I thought they’d make the right decision … I just have to roll with the punches, it is what it is,” Robison said.

At the appeal, Hahnville principal Brian Lumar reportedly played a recording he said was of Vandebilt Principal Jeremy Gueldner saying he wanted to “make a deal” with Robison. Lumar also called the idea laughable that Robison’s father was promised a job at the school prior to the transfer, after a committee member questioned him.

Robison said he didn’t think Vandebilt representatives truly thought he’d return to the school after the dismissal of his father.

“I’d find that very hard to believe,” Robison said. “I don’t think they thought I was really going to come back.”

The Robisons released a statement through Moyer that called the allegations by VCHS “spiteful and vindictive” and said following Drew Robison’s dismissal, the family was left to support a family of five on one income and unable to pay the Vandebilt tuition, prompting a move into the Hahnville High School attendance zone. The family also said all LHSAA rules were followed in regards to that move.

“We are at this point for one reason and one reason only: a former coach made the conscious decision that if Andrew was not going to play for him, then he would play for no one else,” the statement read. “That coach, upset because his ability to compete was diminished … pettily refused to let Andrew wear his jersey to a photo shoot. Andrew committed no wrongdoing whatsoever, under any interpretation of any rule, yet he suffers the greatest consequence.”

Following the initial ruling, Vandebilt released a statement that cited belief Robison was punished too harshly .

“We believe the loss of an entire season is far too high of a price for decisions that this young man had no control over,” the statement read.

Finally able to speak about the situation following the appeal, Saltaformaggio did not hold his tongue on the matter or those he holds responsible.

“I wish I could say I’m shocked, but I’m not,” Saltaformaggio said. “It’s the LHSAA. They’re not gonna care. It’s the most dysfunctional organization in the state of Louisiana.”

Saltaformaggio said Robison did nothing wrong.

“We trusted people we felt were honest and came to find out they weren’t honest at all,” Saltaformaggio said, adding that to date, the LHSAA had not given their reasoning for either denying the appeal or for instituting the harsh penalties in the first place.

“There are so many things about this case that won’t be explained because the LHSAA simply doesn’t care.”

Robison said he hasn’t given up hope that he’ll be able to play again — perhaps even as soon as this Friday — as potential result of legal action.

“I just feel this is so unfair,” Robison said. “I feel we were almost doomed from the beginning, regardless of what could have been done. I haven’t lost hope … I just want to play football again.”

Several Destrehan families are proving that there really is no place like home for the holidays … even after Hurricane Ida changed what that home may look like. […]